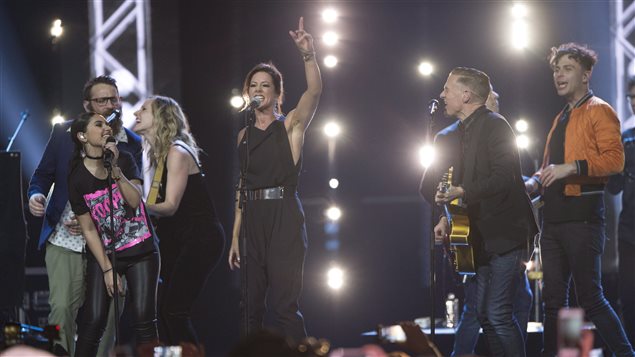 The two-and-a-half hour broadcast was hosted by stand-up comedian Russell Peters and Canadian rock music legend in his own right Bryan Adams.

The show opened with a greeting from this year’s recipient of the Allan Waters Humanitarian Award, the Saskatchewan-born Cree singer-songwriter, Buffy Sainte-Marie.

Legendary Canadian poet and bard Leonard Cohen who received the Album of the Year award at Saturday’s Juno Gala Dinner & Awards, was honoured again Sunday night, with a moving tribute by Feist, who interpreted Cohen’s classic Hey, That’s No Way to Say Goodbye.

Prime Minister Justin Trudeau and his wife Sophie Grégoire-Trudeau delivered a touching tribute to Cohen, who won six previous Junos during his lifetime and was inducted into the hall of fame in 1991.

The Tragically Hip  lead man Gord Downie received Songwriter of the Year, while the band took home Group of the Year award.

Teenage pop sensation Shawn Mendes, who got the crowd on their feet with his sizzling single Mercy, won Juno Fan Choice Award.

Winners from the Juno Awards' televised ceremony on Sunday:

Album of the year: “You Want It Darker” – Leonard Cohen

Group of the year: The Tragically Hip

Breakthrough artist of the year: Ruth B

Songwriter of the year: Gord Downie for “The Stranger,” “The Only Place to Be” and “Son” from his album “Secret Path”

Country album of the year: “Kiss Me Quiet” – Jess Moskaluke