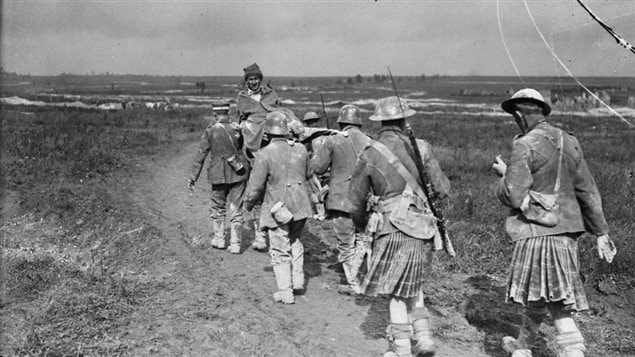 A wounded German is carried by fellow German prisoners being escorted away from the Hill 70 battle-ground by Canadian highlanders: Aug 1917
Photo Credit: Archives Canada PA-001623

In just a few short days, on April 9, a massive crowd will gather at the spectacular Canadian Vimy memorial in France for the 100th anniversary of that incredible victory which marked a turning point for the Allies in that war, and helped to create a sense of Canadian nationhood..

The magnificent memorial was created after the war to remember the important victory on that high ground in 1917.

But another smaller ceremony will also take place a short distance away near the city of Lens.

This will be at an area once known as Hill 70. It was a the site of another tremendous major victory for Canadians, but one which has been largely forgotten. 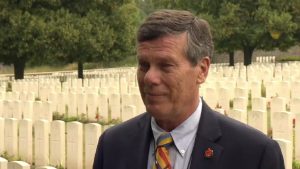 Canadian Forces LCol. (ret’d) Mark Hutchings, shown in France, has been the driving force in creating the impressive memorial at Hill 70, a major all-Canadian victory in WW-I, but largely forgotten until now. Photo: CBC

Lt.Col. (ret.) Mark Hutchings has been leading a battle to rectify that wrong, and his all-volunteer group, the Hill 70 Project will be holding a ribbon cutting ceremony on the newly created memorial to Hill 70.  The ceremony will also be attended by a number of very important state dignitaries and guests from Canada and France.

The multi-million dollar obelisk and memorial park was created entirely through private donations.  It will also have the unique feature of several “vignettes” audio and visual to tell the story of individual soldiers at the battle including those of several Victoria Cross winners. Visitors to the site will be able to see and hear these stories on their mobile phones.  The vignettes are narrated by internationally-known Canadian actor Dan Aykroyd in English, and former Radio-Canada news anchor and veteran broadcaster Bernard Derome in French,  both of whom donated their time to the project along with other volunteers voicing the various soldiers in each vignette.  These vignettes, are expected to be available for download by mid 2018.

The Vimy battle which began on a miserable wet and cold April 9th morning, was a battle planned by a Canadian General with newly devised Canadian tactics.

Previously the tens of thousands of Canadian units had been spread out among the British army, but for the first time they were brought together to fight as a unified Canadian army.

After bitter fighting, the majority Canadian force took the ridge in what became a huge morale booster for the Allies which had not been doing well at all to that point,  but also, and especially, a boost for Canada as a nation.

But another major victory of at least equal importance happened just months later.

The Canadian General, Arthur Currie had been promoted because of his skill with the Vimy battle. Now for the first time, overall control of the Canadian Army would be entirely in Canadian hands.

His newly assigned objective, the important town of Lens. But instead of blindly following a dangerous order, as would normally be the case, he determined instead that the nearby high ground  Hill 70 was the better target, would achieve a greater strategic victory, and not cost nearly as many lives as a direct assault against the city. He was proven right on all accounts.

Again with meticulous planning and preparation the all-Canadian force quickly took the high ground and resisted some 21 counter-attacks.

Although it once again showed the superior fighting ability of the volunteer Canadian army, and although an important strategic and tactical victory, it remained overshadowed by Vimy before it, and the horrific bloodbath of Passchendaele which followed.

It was forgotten and unlike many other victories, no marker was ever set to denote it’s importance and significance.

Project Hill 70 worked to correct this with millions of dollars raised with no public money from the government.  Many professionals donated days and weeks of effort pro-bono to help.

Now a beautiful memorial obelisk and park are coming together to be ready for the 100th anniversary in August.

But this April, along with the Vimy commemoration, an official ribbon cutting ceremony will take place with dignitaries from Canada, France and elsewhere to mark the setting of the obelisk memorial.