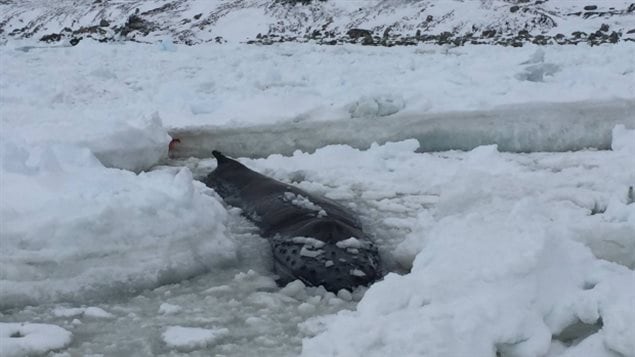 A humpback whale is shown trapped in the ice off the coast of Newfoundland on Apr. 1, 2017.
Photo Credit: Whale Release and Strandings / Facebook

The animal was noticed struggling in the ice on Friday, and unable to go anywhere.

Rescuers say the ice is too thick for an ice-breaker to get into the cove near the town of Old Perlican on the northwest coast of the Avalon Peninsula.

On their Facebook page, the group Whale Release and Strandings says. “There is nothing that can be done to assist unless the wind changes and frees the ice in the cove”.

Onlookers have said the animal had been calling desperately “ crying like a baby”.

On Sunday, the ice had shifted a bit but not much. It seems the only hope for the animal is if the winds shift and push ice out of the cove. but fishermen say it could be days before that happens.

Onlookers have said the animal had been calling desperately “ crying like a baby”.  A severe winter storm hit much of Newfoundland late last week leaving up to 35cm of snow in some areas with strong onshore winds pushing ice into several coves.  Difficult weather conditions with strong winds up to 80km/h and blowing snow is likely for much of the island today.

There have been many unfortunate cases of whales and porpoises trapped and killed by shifting ice. In 2014, several huge blue whales were believed to have died because of shifting ice trapping them off the coast of Newfoundland.  In another area off Newfoundland that same spring some 30 white-beaked dolphins were believed to have died from ice traps.