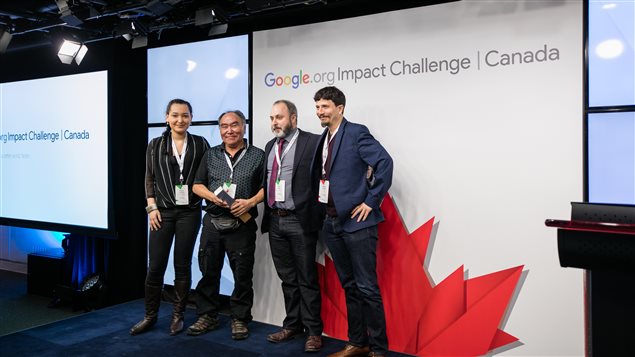 A Canadian NGO working with Inuit and Cree communities in the rapidly changing Hudson Bay region is one of five winners of the $5-million Google.org Impact Challenge.

The Arctic Eider Society’s SIKU project to harness and preserve Inuit traditional knowledge using state-of-the-art digital tools will receive $750,000 in grant funding and hands-on support from both Google and their local support partner, the LEAP Centre, for the next year to help them bring their projects to life, Google Canada announced last week.

“We’re really excited,” said Joel Heath, president of the Arctic Eider Society. “Our project is called SIKU, which is the Inuktitut word for sea ice and we’ve been basically bringing together the best of technology to benefit the Inuit.”

(click to listen to the full interview with Joel Heath)

Users can contribute to profiles as well as tag photos and comments with profiles for sea ice types, wildlife, traditional place names, using Inuktitut terminology in various dialects, Heath said. It also has a mobile app that allows users to take GPS-referenced photos and tag them to help mobilize Inuit observations on the land and out on the ice, he said.

“Each of these profiles will be like a Wikipedia of Inuit knowledge, bringing together these different tools and services to help with safety on the ice and knowledge transfer, documenting Inuit observations over time and mobilizing that knowledge,” Heath said.

“It will be basically a social media for Inuit, by Inuit,” Heath said.

The project started as a prototype for the community-driven research programs in the southeast Hudson Bay – James Bay area.

“Whenever the hunters are out doing work – like a salinity profile or taking ice core samples – the results of the work would show up on their profiles,” Heath said. “So it will be a way to manage the data, for one, but to keep track, so that hunters in different communities could see the work they’ve contributed to and to see the work that’s going on in neighbouring communities.”

That allows the communities to get involved in the research and interpret the results in their own knowledge system, he said.

The team behind SIKU is also working to cross-reference all the sea ice terminology in various Inuktitut dialects to preserve this essential linguistic and survival knowledge, Heath said.

“So the profile for the type of ice would have all those different Inuktitut dialects as well as the Canadian Ice Service term,” Heath said. “And depending where your profile is from, it would show your dialect first.”

In the short term the online tool will allow hunters to share safety and travel information, he said.

For example, if an experienced hunter encounters dangerous ice conditions, he can take a photo of that ice and tag it with GPS coordinates to warn others less experienced hunters to avoid the area, Heath said.

“But in the long term it’s also documenting changes over time,” Heath said. “The more you document those ice conditions, then you have a long time series showing how the ice has changed.”

The Arctic Eider Society is also using the results it received from the SIKU prototype to teach a culturally relevant curriculum for math and science in local area schools, Heath said.

“We’re teaching by using data collected by Inuit hunters and examples that are culturally relevant,” Heath said. “We’re even teaching trigonometry by looking at the angle that the eider duck dives underneath the ice, for example.”

The NGO’s vision is to bring the right curriculum to the northern schools to inspire those youth to be the next generation of environmental leaders and researchers, and to provide them with training opportunities with experienced hunters, Heath said.