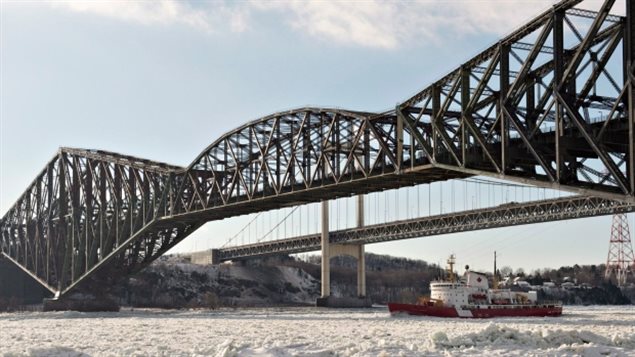 The rusting Pont du Québec has been named a National Historic Site, however governments and CN Rail (the owner) have been unable to agree on who should pay to paint and repair
Photo Credit: Jacques Boissinot/Canadian Press

A bridge too far.. too far gone.

Well, OK, that’s a bit of an exaggeration. The Quebec City bridge is not beyond repair, not ‘too far gone”, but it is in rough shape.

The riveted steel structure is still the longest cantilever bridge in the world and was declared a National Historic Site of Canada in 1996.

Now nearing it’s centennial. the road, rail, and pedestrian bridge is certainly showing its age, a victim of humidity and salt which is rusting and weakening the structure.

A Belgian expert on anti-corrosion visiting Quebec City this week inspected the bridge and told Radio-Canada news that the bridge was in a condition equivalent to those he had seen in developing countries.  To be fair, Bruno Saverys was in the provincial capital to promote his anti-corrosion products.

Nevertheless, photos show some disquieting rusting of the structure.

In a Radio-Canada report Quebec City Mayor Regis Lebaume is quoted saying that the erosion of metal can never be good, adding in French, “that’s the second European expert who has said there’s potential danger”, adding that in light of these comments, the situation “has to be taken seriously”.