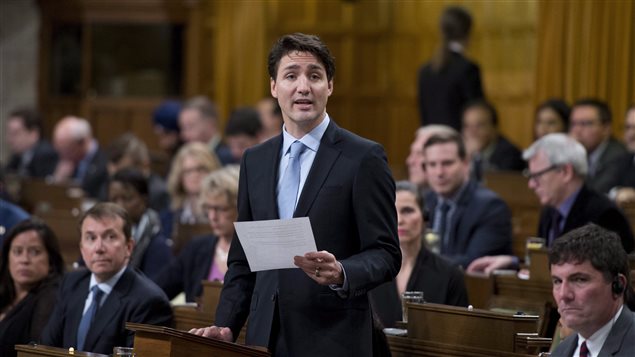 Prime Minister Justin Trudeau responds to a question on the situation in Syria during question period in the House of Commons on Parliament Hill in Ottawa on Friday, April 7, 2017.
Photo Credit: PC / Justin Tang

Canada informed about U.S. missile strike in Syria in advance

“The minister of defence then immediately briefed me,” Trudeau said, addressing the House of Commons.

This morning, he spoke with U.S. President Donald Trump directly and emphasized that Canada agrees that Syrian President Bashar al-Assad’s repeated use of chemical weapons must not continue, Trudeau said.

“In the face of such heinous war crimes all civilized peoples must speak with one voice,” Trudeau said. “That is why Canada fully supports the United States’ limited, focused action to degrade the Assad regime’s ability to launch such attacks.”

Canada continues to support diplomatic efforts with its international partners to resolve the crisis in Syria, Trudeau said.

The strike appears to have prompted an abrupt change in Trudeau’s position; on Thursday, he stopped short of directly blaming Assad and his government for the chemical weapons attack in the northern Idlib province.

“Yesterday, that was not the prime minister’s position,” said Conservative MP Pierre Poilievre, reiterating his party’s support for the U.S. strike. “At that point he said it wasn’t even clear who was responsible for the chemical attack on Syrian civilians and that the UN Security Council need to hold another meeting, which would include a veto power by the Russian Federation.”

The United States fired cruise missiles at Syria overnight, in response to this week’s chemical attack that killed more than 80 Syrian civilians in the province of Idlib.

The American missile strikes hit a government-controlled airbase in central Syria. U.S. officials say the airbase was the originating point for the plans behind Tuesday’s gas attack.

U.S. officials informed Russian forces ahead of the strikes and avoided hitting Russian personnel stationed at the base.

In a post on social media, Russian Prime Minister Dmitry Medvedev said the strikes were illegal and had been “one step away from military clashes with Russia.”

With files from The Canadian Press, The CBC News and Reuters