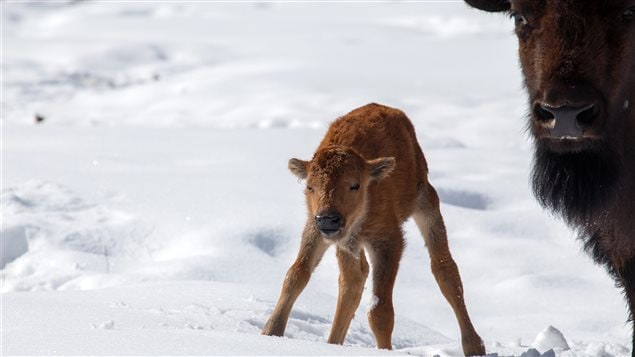 For the first time in over 140 years tiny bison calves will be grazing on the rocky slopes of the UNESCO World Heritage Site. This little calf was born on Saturday in the Panther Valley area followed by two other calves.

For thousands of years, vast herds of plains bison roamed the Great Plains and the eastern slopes of the Rocky Mountains. But the majestic animals were driven to near extinction by overhunting in the second half of the 19th century.

In 1897, Banff National Park (then Rocky Mountains Park) protected some of the few remaining wild bison left in North America as a display herd.

The federal government bought another 700 plains bison from the last wild herds in 1907 and shipped them to Elk Island National Park. These bison became the primary source of animals for reintroduction projects around the world.

The same Elk Island population of plains bison was the source of animals for the Banff reintroduction earlier this year.

Parks Canada officials selected 16 healthy bison – mostly pregnant two-year olds – for transfer to Banff. These animals were quarantined for three weeks and underwent health testing to ensure they were free of diseases such as bovine tuberculosis and brucellosis.

Then in late January they were loaded into custom-made shipping containers and transported overnight by truck approximately 400 km to the government-owned Ya Ha Tinda Ranch near the border of Banff National Park.

The shipping containers were airlifted by helicopter to a “soft-release” pasture in Banff’s Panther Valley where the animals were released. Parks Canada staff will continue to monitor the health of the herd and ensure the new arrivals have access to food and water.

The bison will be kept in the soft release pasture for approximately 16 months before being released in 2018 to roam freely in the reintroduction zone within Banff National Park, Parks Canada said in a press release.