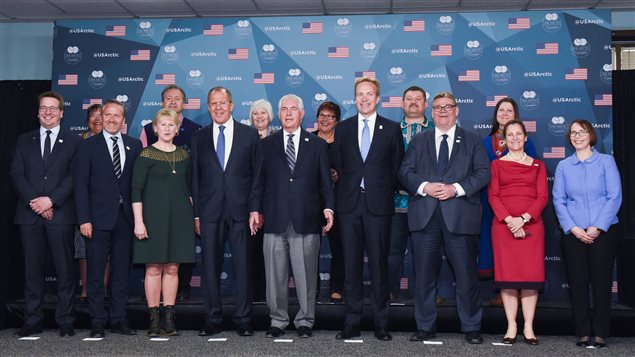 Canada and its seven Arctic neighbours signed a binding science cooperation agreement that aims to make it easier for the scientists from all eight circumpolar countries to collaborate with each other in their research in the rapidly changing region.

“The Agreement will reinforce Canada’s role as a leader in Arctic science and help attract international researchers to the Canadian Arctic,” Freeland said in a statement. “It will also facilitate Arctic scientific cooperation, which will help us make better decisions for Northerners and all Canadians.”

Freeland was accompanied at the meeting in Fairbanks by Canadian Indigenous Permanent Participants that include the Arctic Athabaskan Council (AAC), the Gwich’in Council International (GCI) and the Inuit Circumpolar Council (ICC).

The agreement, which was negotiated among the eight Arctic countries, in consultation with six Indigenous Permanent Participant organizations of the Arctic Council, is expected to make it easier for scientists to travel, bring their equipment across national borders, conduct studies and experiments and share their research and expertise.

It also encourages scientists to use the traditional knowledge of Arctic’s Indigenous communities.

The agreement is expected to attract international researchers to Canada’s North, including to the Canadian High Arctic Research Station (CHARS) campus, which Polar Knowledge Canada (POLAR) will operate upon its completion in 2017, said a statement from Global Affairs Canada.

“Through this Agreement, Polar Knowledge Canada will strengthen its international leadership in ensuring that Arctic research reflects the rich history, traditions, expertise, knowledge and priorities of Northerners and Indigenous peoples,” Minister of Indigenous and Northern Affairs Carolyn Bennett said in a statement. “We are taking meaningful steps to make sure research about the North is led by the North.”

It is the third legally binding agreement negotiated under the auspices of the Arctic Council, which brings together Canada, Denmark (for Greenland), Iceland, Finland, Norway, Russia, Sweden and the United States, as well as six Indigenous Permanent Participant organizations and a number of observer states and organizations.

The ministerial meeting in Fairbanks marked the end of U.S. chairmanship of the Arctic Council and the transfer of the two-year rotating chairmanship to Finland.