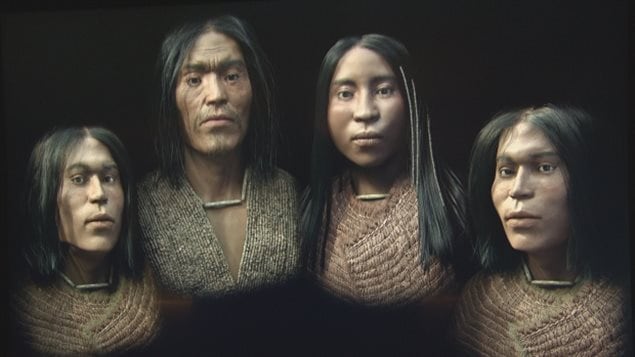 The reconstruction was created from the remains of members of a wealthy aboriginal family from the west coast of Canada.
Photo Credit: CBC/Canadian Museum of History

The Canadian Museum of History has revealed the results of a digital facial reconstruction based on the remains of a west coast indigenous family from the shíshálh tribe, also known as the Sechelt First Nation. This tribe lives amid spectacular scenery and is proud of its communal lifestyle that prizes the wisdom of its elders.

The museum says that the shíshálh Nation requested archaeologists from the museum and the University of Toronto help excavate a burial site near to the community. The remains of five people were discovered including a man in his 50s, a young woman, a set of young, adult, male twins, and an infant.

Amid the bodies were hundreds of thousands of stone and shell beads which suggested they were tremendously wealthy. The museum calls the site “one of the most significant chiefly burial finds in North America.”

After an in depth study of the remains, they were returned to the community for reburial. The information gathered along with input from the tribe was used to produce “scientifically accurate reconstruction of each of the faces including hair, jewellery, facial expressions and clothing.

The animated model will be presented in the museum’s Canadian History Hall on Canada’s birthday, July 1st. The hall is intended “to present the story of Canada and its people more inclusively and candidly than ever before.” It will trace Canada’s history from the first human habitation to the present.

The Canadian Museum of History is located across the river from the nation’s capital Ottawa in Gatineau, Quebec.