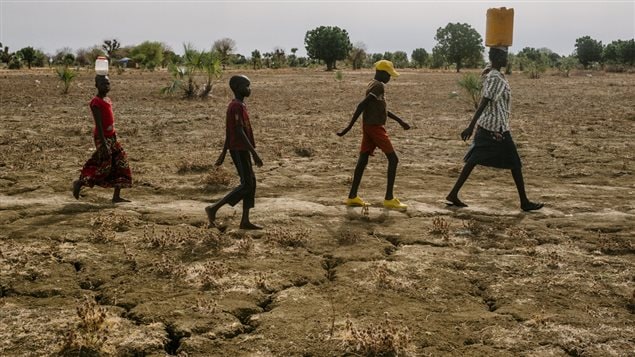 South Sudan, the world’s youngest nation formed after splitting from the north in 2011, has declared famine in parts of Unity State, saying 100,000 people face starvation and another million are on the brink of famine.
Photo Credit: Renaud Philippe

South Sudanese refugees in northern parts of the country are in desperate need of humanitarian assistance before the rainy season sets in, making it even harder to reach the already isolated areas, says a Canadian photographer who just returned from Unity State near the border with Sudan.

Speaking to Radio Canada International from capital Juba, Renaud Philippe said nothing in his career of covering strife and humanitarian disasters compares to the desperate situation he witnessed in South Sudan.

(click to listen to the interview with Renaud Philippe)

A deadly combination of civil war and a devastated subsistence economy already under stress from climate change have left more than 100,000 people facing starvation in parts of South Sudan, according to three UN agencies and their partner NGOs.

The Food and Agriculture Organization of the United Nations (FAO), the United Nations Children’s Fund (UNICEF) and the World Food Programme (WFP) warned earlier this year that an additional one million people are classified as being on the brink of famine, with that number expected to rise to 5.5 million by mid-summer if nothing is done to resolve the food crisis.

The escalating conflict in South Sudan had driven more than one million children out of the country, according to the latest statistics released by the United Nations.

“The horrifying fact that nearly one in five children in South Sudan has been forced to flee their home illustrates how devastating this conflict has been for the country’s most vulnerable,” said Leila Pakkala, the Regional Director for Eastern and Southern Africa of the UN Children’s Fund (UNICEF), in a press release issued jointly with the UN refugee agency.

“Add this to the more than one million children who are also displaced within South Sudan, and the future of a generation is truly on the brink,” she warned.

Philippe said he visited a remote area in Unity State where thousands of internally displaced people fleeing the violence have sought refuge on remote islands scattered in huge marshes along the White Nile.

“They found some peace on these islands but the problem is, because it’s hard to access they have no food, no proper healthcare,” Philippe said.

The local communities are trying to help the refugees but their resources are strained to the limit Philippe said.

People subsist on fishing with spears and harvesting water lilies, he said.

“That’s the only thing they can have at this time,” Philippe said.

But the situation will get even more desperate with the approaching rainy season.

“Because of the rainy season no more planes will be able to land in this area, only choppers, which is a lot more expensive than planes,” Philippe said. “So all the international aid provided in this area will be compromised.”

All the NGOs in the area are in a race against the clock to establish their programs and bring in supplies before the rainy season starts, he said.

“It’s now that we need to do something because the rainy season is coming and it will only become worse and worse,” Philippe said.

Canadians can help by donating money to the international aid groups that work in the area, he said.