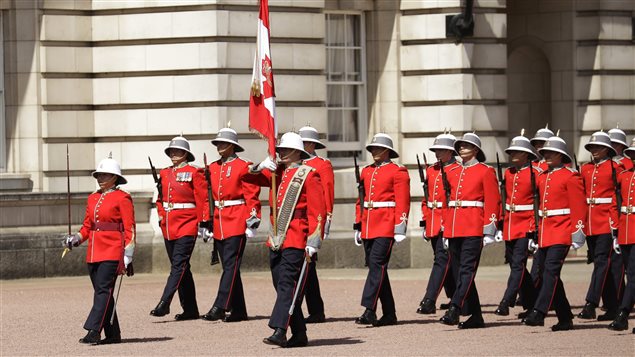 Canadian Capt. Megan Couto, left, makes history by becoming the first female Captain of the Queen’s Guard as she takes part in the Changing the Guard ceremony at Buckingham Palace in London, Monday, June 26, 2017. Couto and her unit, The Second Battalion, Princess Patricia’s Canadian Light Infantry (2PPCLI), known as *The Patricia’s*, took part in the ceremony Monday to coincide with the 150th anniversary of Canada and the sesquicentennial anniversary of Canadian Confederation.
Photo Credit: Matt Dunham

Canadian Army Capt. Megan Couto made history on Monday by becoming the first female infantry officer to command the troops guarding the Queen and royal residences in London.

The 24-year-old member of the 2nd  Battalion, Princess Patricia’s Canadian Light Infantry (2 PPCLI), led some 40 Canadian soldiers through the Changing of the Guard at Buckingham Palace.

As part of Canada 150 celebrations, 80 soldiers from 2 PPCLI and 35 members of the Royal Canadian Artillery Band are taking part in ceremonial duties as the Queen’s Guard in the United Kingdom.

The crowds of curious onlookers lining the sidewalk got a taste of even more Canadiana as the Royal Canadian Artillery Band performed Leonard Cohen’s Hallelujah and the theme song to Hockey Night in Canada.

“Congratulations to Capt. Megan Couto, who made history today as the first Infantry woman to Captain the Queen’s Guard,” Defence Minister Harjit Sajjan said in a statement. “Women have been involved in Canada’s military service for more than 100 years. The Canadian Armed Forces takes pride in being a leader in the field of equality and women’s rights.‎ Bravo Zulu Captain Couto!”

Watch as Canadian Soldier Captain Megan Couto becomes the first female ever to Captain The Queen’s Guard during Changing the Guard. pic.twitter.com/iSjgX98Eaz

The Queen’s Guard is charged with guarding the official residences of the Royal Family including, Buckingham Palace, St. James’s Palace, Windsor Castle and the Tower of London. Tourists often gather to watch the grand Changing of the Guard ceremony featuring soldiers parading in their iconic red tunics and black bearskin helmets.

But Canadian soldiers could be distinguished by their white and grey pith helmets.

Women have commanded the Queen’s Guard in the past, but no female infantry officer has served as captain before because, until 2016, women in the United Kingdom were banned from ground close combat roles.

The significance of becoming the first infantry woman to lead the Queen’s Guard in its 180-year history of protecting Buckingham Palace was not lost on Couto.

“I’m just focusing on doing my job as best I can and staying humble. Any of my peers would be absolutely delighted to be Captain of the Queen’s Guard and I’m equally honoured,” Couto told The Canadian Press before the ceremony.

Couto joined the military in the summer of 2010. After completing her degree at the Royal Military College of Canada in Kingston, Ontario she was posted to 2 PPCLI in Shilo, Manitoba.