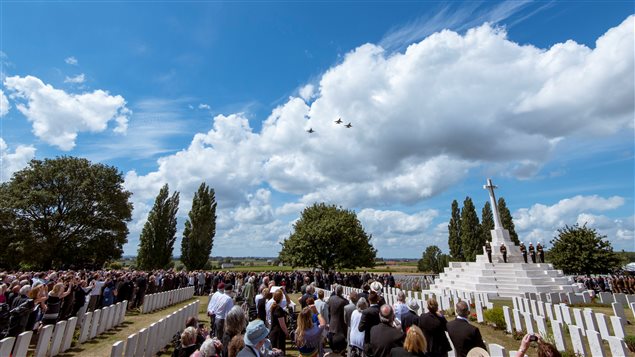 Jets fly over commemorations for the 100th anniversary of the battle of Passchendaele at Tyne Cot cemetery near Ypres in Belgium, July 31, 2017.
Photo Credit: POOL New

Representatives of the British and Belgian royal families, Germany’s foreign minister and descendants of some of those who died in one of the First World War’s bloodiest battles gathered Monday in western Belgium to mark the centenary of the Third Battle of Ypres, more commonly known simply as Passchendaele.

More than half a million Allied and German troops, including  16,000 Canadians, were killed or wounded in the fields of Passchendaele that had become a sea of heavy mud with the incessant artillery fire having destroyed dikes and drainage ditches which normally kept the ground dry.

Early and heavy rains only made the situation worse as the ground turned into a nightmarish landscape poked with craters of fetid water often filled with the bodies of the fallen.

Gathered at the Tyne Cot Cemetery, where almost 12,000 soldiers are buried, representatives from nations whose soldiers fought, and members of their families, paid homage to those who died.

The Canadian government at today’s Passchendaele Commemorations was represented by Ambassador Olivier Nicoloff.

Veterans Affairs Canada is currently working on commemorative activities related to the 100th anniversary of the Battle of Passchendaele in November, said Nick Wells, a spokesperson for the department.

“In addition to events here in Canada, there will be a ceremony in Belgium with a Canadian delegation that will include Veterans, youth, representatives of regimental and Indigenous organizations, as well as a contingent of Canadian Armed Forces,” said Wells.

“These ceremonies are being organized to commemorate the Canadian elements of the Battle of Passchendaele.”

Canadians entered the Battle of Passchendaele in October 1917.

The Canadians were sent to Belgium to relieve the British, Australian and New Zealand (ANZAC) forces and take part in the final push to capture Passchendaele.

The Canadian offensive began on October 26, 1917 and by the end of the second attack, the Canadians  had reached the outskirts of Passchendaele on October 30.

On November 6, the Canadians finally took the shattered village in the face of withering resistance and counter-attacks. By November 10, they had pushed the Germans off the nearby ridge, succeeding in mere weeks, where the British and ANZAC forces had failed during a horrific campaign of several months.

Canadians paid a heavy price for their victory with 4,000 dead and almost 12,000 wounded.

German Foreign Minister Sigmar Gabriel said “the battle of Flanders stands like Verdun for the senseless horror of war.”