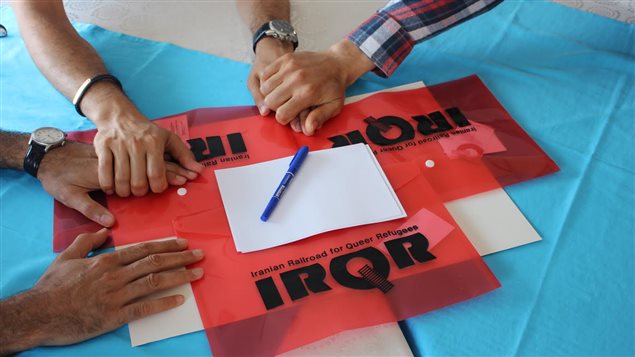 LGBTQ, the acronym for lesbian, gay, bisexual and transgender refugees, who escaped the oppression in Iran and Afghanistan are now stranded in Turkey, according to Iranian-Canadian, Arsham Parsi.

Parsi is the executive director of the Iranian Railroad for Queer Refugees (IRQR).

“Some of them are very successful”

He says the majority of LGBTQ people, holding passports can cross the border into Turkey and get three-month visas, but the goal is to come to the United States or Canada, or a western country that will accept them as refugees based on their sexual orientation.

Arsham Parsi has just returned from another visit to Turkey. He visits regularly to speak with officials at the the UNHCR (the United Nations High Commission for Refugees) to plead the cases of LGBTQ people from his native Iran, and in some cases, Afghanistan.

On this recent trip, Parsi met with 9 children, the innocent victims of a twisted society.

They are the children of LGBTQ people who were forced to marry and have since been abandoned by the non-LGBTQ parent.

Parsi was using the funds from his organisation to pay for school supplies for these children, who face the barriers of language and economic hardship as refugee children in Turkey.

Parsi says while many LGBTQ Iranians have had their refugee status recognized and are accepted for resettlement, with the recent crisis in Syria, their cases have been relegated to the back of the queue.

“It’s worse than ever, because unfortunately most resettlement countries, such as Canada and the United States, they have a long delay; In the U.S. we have had the Trump travel ban. A lot of people who were granted refugee status by the UNHCR they’re stuck and they’re waiting for travel to the United States.” Parsi says.

For Canada, Parsi says it’s been over two years since any non-Syrian refugees were interviewed. He says it’s created a huge backlog at the Canadian embassy in Ankara.

Meanwhile, the conditions for these refugees in Turkey are only marginally bettter, than they were in Iran, where their sexuality is a matter of life and death.

Parsi says in Turkey, many LGBTQ people have been beaten up by strangers or threatened at gunpoint.

This isn’t based on their sexuality, as it might be in Iran, but because they are refugees and foreigners, and they’re struggling to make ends meet.

“And the financial issues, because most of them don’t have any savings or family suppport, and they have to work,” Parsi says.  “And the Turkish government doesn’t provide them work permits and they have to work on the black market and they open themselves to a lot of abuse, as well.” he explains.

Since a 1987 fatwa, issued by the late Ayatollah Ruhollah Khomeini, Iran permits more sex-change operations than any other country, except Thailand.

Iran has subsidised these surgeries, with the result most LGBTQ Iranians have only the option of gender reassignment in order to remain in the country.

Still, many people are rejected by their families and alone and isolated in their communities.

“A lot of homosexuals, you know, they are being forced to go through sexual reassignment surgeries because in Iran, usually doctors and councillors cannot tell them ‘you are homosexual and you can have your life’, but you know it’s a kind of non-written regulation that they push them towards sex-change and it makes them very vulnerable.” Parsi says.

Arsham Parsi has helped many people resettle in Canada. He says for some LGBTQ refugees it is a challenging process, but others have settled and prospered.

“I have some of my former clients… they have finished their university and they’re teaching at the University of Toronto, some of them they are opening their own businesses and they’re working and they’re successful… and they are totally different person from several years ago when I met them and they were desperate and they were in danger. It’s a happy moment for me to see them.” Parsi says.

When Parsi presses for answers from the Canadian government he says the official response is evasive and there’s a lot of passing the buck at the department of Immigration, Refugees and Citizenship Canada

Parsi says while officials insist there is no discrimination, since 2015, no non-Syrian refugees have been interviewed to come to Canada.

Arsham Parsi will be taking a trip back to Turkey in the near future, to keep the hopes of many LGBTQ refugees alive, and to remind the officials there are other people waiting.