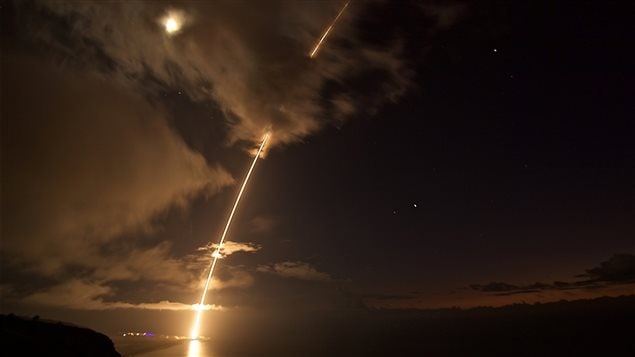 The dizzying tempo of North Korea’s ballistic missile and nuclear weapons development program is raising questions in Ottawa whether Canada too should join the American ballistic missile defence umbrella despite uncertainty over its efficacy, costs and any meaningful Canadian role in decision-making.

The latest missile test by North Korea and its furthest-reaching yet came hours after more than a dozen academics, security experts, diplomats and high ranking defence officials appeared in front of the House of Commons standing committee on national defence on Thursday to discuss whether Canada is ready to defend itself and its allies in the event of an attack by Pyongyang.

The stark message delivered by a top Canadian general was that Canada has nothing in its arsenal that could protect the country’s territory in the event of a ballistic missile nuclear strike by North Korea.

And under the current U.S. policy, the American military would not protect its northern neighbour from such an attack, said Lt.-Gen. Pierre St-Amand, the Canadian deputy commander of the binational North American Aerospace Defence Command (NORAD).

“The extent of the U.S. policy is not to defend Canada,” said St-Amand. “That’s the fact I can bring to the table.”

St-Amand said because Canada is not part of the U.S. ballistic missile defence (BMD) program, Canadian military personnel posted to NORAD would have no role in deciding what to do if a ballistic missile from North Korea or any other country was detected heading toward North America.

They would instead be passive observers, waiting to see whether U.S. officials would in fact decide to shoot down a missile or missiles heading toward Canada.

St-Amand’s testimony shattered a long-standing Canadian myth that the Americans will defend Canada against incoming missiles, Rob Huebert, a professor of political science at University of Calgary who also testified at the hearing, told Radio Canada International.

(click to listen to the full interview with Rob Huebert)

“We are completely deluding ourselves if we automatically assume that under every single possibility the Americans will come to the forefront and defend us,” said Huebert, who teaches strategic studies.

Given the limited number of interceptor missiles available to U.S. commanders, they might feel compelled to reserve their missiles in case of a multiple missile launch by North Korea, Huebert said.

“If we’re not part of a treaty system, I can easily see where the America commander could be thinking that and by the time it gets overridden by a political leader who is obviously going to be focused on other issues it may be too late for Canada,” Huebert said. “I think it’s naïve for us to simply say we can defend Canada against a North Korean strike because the Americans will do it regardless of any form of an agreement.”

Huebert says he wholeheartedly agrees with the proponents of the idea of joining the U.S. ballistic missile defence program.

“It’s imperative that we talk to the Americans to get into the system, even if it’s coming in as junior or subordinate partner but just to lock us into the American system,” Huebert said.

The government may also want to think seriously about arming its future warships, the 15 or so Canadian Surface Combatants the government plans to build to replace the current fleet of Halifax-class frigates, with the Aegis Ballistic Missile Defence System, a U.S. developed platform to provide missile defence against short to intermediate-range ballistic missiles, Huebert said.