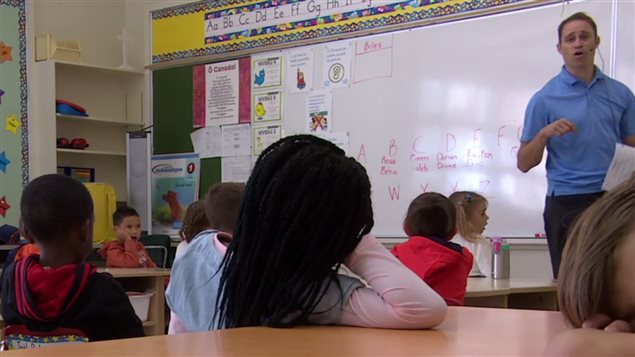 In any given class, there may be 1 to 3 students with ADHD.
Photo Credit: CBC

Attention Deficit Hyperactivity Disorder is one of the most common disorders that cause learning impairment in students, but it has not been recognized by education officials or the government, says the advocacy group, Centre for ADHD Awareness, Canada (CADDAC). That, it says, results in inconsistency across school systems and inequity for affected students.

Symptoms of ADHD include not being able to stay focussed, excess movement and impulsivity or hasty acts that occur without thought.

“There’s still a lot of misinformation and myths out there,” says Heidi Bernhardt, founder and president of CADDAC. “Even the concept that ADHD is a real disorder and these students are not doing what they’re doing on purpose just to annoy people, that stigma and misinformation and mislabelling is still very apparent in our schools.”

The result is that many students with ADHD are frequently reprimanded. “(There is) unfortunately a lot of negative messaging and a lot of negative feedback…and we know it takes a significant toll on these kids’ self-esteem,” says Bernhardt. She says the lack of accommodation for these students adds an 8-10 per cent decline in literacy, numeracy and academic attainment and three times the drop out rate.

Many teachers are not educated, says advocate

In her view, the biggest problem is that teachers are not educated about ADHD. She adds that because most jurisdictions will not identify those with the condition as “exceptional learners,” they are not eligible for special education resources or a support plan.

Although she acknowledges that it is difficult for parents to speak up about the problems their children face in school, she thinks it is the best way to get changes.

In Canada, education is the responsibility of each province and territory. So there is great variation in the level of support provided to students with ADHD.

Bernhardt says most teachers have 1-3 students with ADHD in their classes. The students can be disruptive and use up much of the teacher’s energy and school resources. She thinks those resources would be better spent if schools took a proactive approach to accommodating students with ADHD.