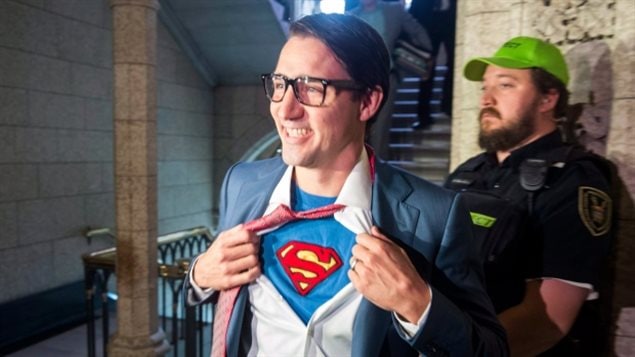 Prime Minister Justin Trudeau shows off his costume as Clark Kent, alter ego of comic book superhero Superman, as he walks through the House of Commons, in Ottawa on Tuesday.
Photo Credit: (Adrian Wyld/Canadian Press)

Prime Minister Justin Trudeau had a Halloween surprise for the parliamentary press gallery when he showed up for question period today.

Trudeau sported wide-rimmed spectacles, slicked-down hair and a blue suit with a bright red tie as he descended stairs in Parliament’s Centre Block.

As he got to the bottom of the stairs, he opened his shirt to expose the Superman costume hidden underneath.

Prime Minister Clark Kent has a ring to it, doesn’t it?

Trudeau, who has a penchant for wearing colourful socks, has never shied away from having fun with Halloween.

He dressed up as Han Solo of “Star Wars” fame for his first year in office.

Last year he went trick-or-treating as a pilot from the French children’s book “The Little Prince,” while his youngest son, Hadrien, went as the book’s protagonist.

Trudeau wasn’t the only MP in the House getting into the Halloween spirit.