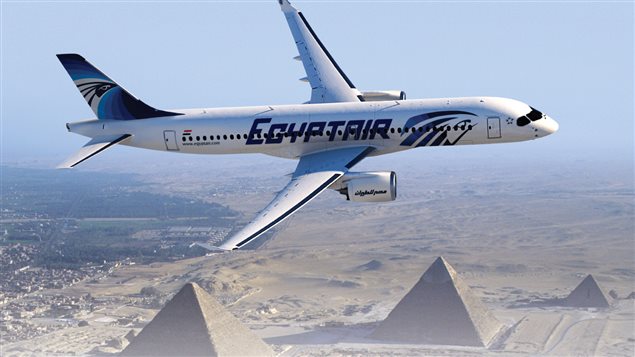 Bombardier Commercial Aircraft announced today, from the Dubai Airshow, that it has signed a letter of intent (LOI) for up to 24 CS300 aircraft with EgyptAir Holding Company.
Photo Credit: Bombardier

EgyptAir signs letter of intent for up to 24 Bombardier CS300s

Bombardier Commercial Aircraft has signed a letter of intent with EgyptAir for the purchase of up to 24 of the Montreal-based company’s larger C Series aircraft, the CS300, the Canadian plane-maker announced at the Dubai Airshow Wednesday.

The transportation giant said the deal is a firm order for 12 of the jets, plus an option to buy an additional 12.

EgyptAir will pay $1.1 billion for a dozen of the 130- to 160-seat jets. Should EgyptAir also exercise the option to purchase 12 additional jets, the contract value would increase to nearly $2.2 billion US, Bombardier said in a press release.‎

“We selected the C Series aircraft because its excellent range will allow us to best serve domestic and regional destinations, including neighboring Arab cities, the Middle East as well as several European destinations,” Safwat Musallam, chairman and CEO of EgyptAir Holding Company, said in a statement.

“This is in addition to the CS300 aircraft’s exceptional economics and outstanding cabin. We look forward to expanding our network with the CS300 and we are happy to see that the partnership announced with Airbus will bring added support to the C Series program.”

It’s the second order for the planes since Bombardier signed a deal with Airbus last month to give half its C Series business to Airbus, to take advantage of their marketing and manufacturing clout.

That move came after the U.S. Commerce Department imposed tariffs of up to 300 per cent on Bombardier’s jets sold in the U.S following a complaint by Boeing.

Bombardier hasn’t landed a firm order for its jets in calendar 2017 and is facing a growing backlog on delivering the ones it has already sold.