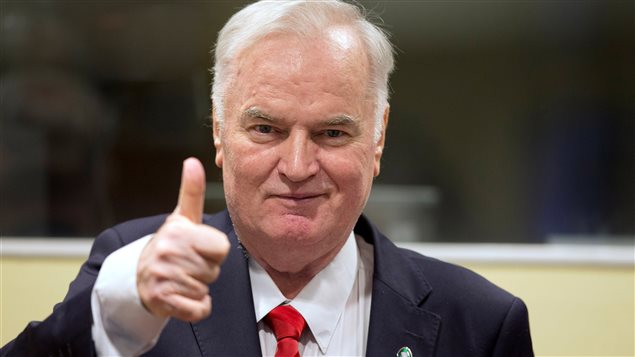 ‘Butcher of Bosnia’ Mladic sentenced to life for genocide and atrocities

Former Bosnian Serb commander Ratko Mladic, whose forces rained shells and snipers’ bullets on besieged Sarajevo and carried out the worst massacre in Europe since World War II in Srebrenica, was convicted Wednesday and sentenced to life in prison for genocide and other atrocities in the 1990s Bosnian war.

The UN tribunal in The Hague convicted him on 10 of the 11 charges.

The Trial Chamber of International Criminal Tribunal for former Yugoslavia (ICTY) found Mladic guilty of genocide, persecutions on ethnic and religious grounds of Bosnian Muslims and Croats, as well as extermination, murder, deportation and crimes against humanity.

The “Butcher of Bosnia” was also convicted for murder, terror, unlawful attacks on civilians and the taking of hostages.

Mladic was acquitted on one count of genocide in relation to the crimes committed in six northern municipalities, but was found to have been part of the joint criminal enterprise to remove Bosnian Muslims and Croats from those territories.

‘Impunity cannot and will not be tolerated’

“This landmark verdict marks a significant moment for international justice and sends out a powerful message around the world that impunity cannot and will not be tolerated,” said John Dalhuisen, Amnesty International’s Europe director.

“Whilst it does not end the suffering of those relatives who have waited more than 20 years to see this day, seeing justice delivered might offer them some closure.”

“This opinion is shared by all the Serbs,” Dodik said, describing Mladic as “a hero and a patriot.”

Serbian President Aleksandar Vucic, a former ultranationalist who supported Mladic’s war campaigns but now casts himself as a pro-EU reformer, agreed that the court has been biased against Serbs but added that “we should not justify the crimes committed” by the Serbs.

‘Too little too late’

Larisa Kurtovic, a professor of anthropology at University of Ottawa who conducts research in Bosnia-Herzegovina, said it was very important that the trial took place, and that Mladic received a life sentence.

“Nevertheless, although justice appears to be served, it just feels like it’s ‘too little too late’,” Kurtovic, who was 10 years old when the siege of her native Sarajevo began, said in an email.

“There is a tremendous mismatch between the crime and the punishment, which I suppose is an inevitable part of many trials, particularly those for war crimes and genocide.”

What’s more, Mladic’s verdict is overshadowed by the fact that the Bosnian War (and more broadly, the so-called “wars of Yugoslav secession”) by and large actually accomplished their goals, which included consolidation of ethnically defined territories, as well as the destruction of political alternatives that could challenge nationalist and fascist political forces unleashed in the 1990s, Kurtovic said.

“Mladic is not a lone agent, but a link in a chain – the political ideology he represents is very much alive in the region today,” she said.

Kurtovic said she hopes that the verdict will help progressive political forces in the region challenge the rampant historical revisionism, which still characterizes nationalist narratives about the war.

But that remains to be seen, she said.

“Judging by some of the reactions I am reading about this morning, the path ahead of us is long and thorny,” Kurtovic said.

Srdjan Vucetic, professor of political science at the University of Ottawa who was 14 when the Bosnian War broke out, said he was “gratified” that the court convicted the former general of genocide and crimes against humanity.

“It’s a mixed feeling, in some ways Mladic will have what he deserves, which is to die in jail,” Vucetic said. “But the job (going forward) will be to appreciate what the victims and their families are saying and to pay attention to the legacy Mladic and people of his ilk have left behind, which can be seen everywhere in Bosnia. And that will be the job for the current and future generations.”

The conflict in the former Yugoslavia erupted after the country’s breakup in the early 1990s, with the worst crimes taking place in Bosnia. More than 100,000 people died and millions lost their homes before a peace agreement was signed in 1995. Mladic went into hiding for around 10 years before his arrest in Serbia in May 2011.

Mladic’s political master during the war, former Bosnian Serb President Radovan Karadzic, was also convicted last year for genocide and sentenced to 40 years. He has appealed the ruling.

The man widely blamed for fomenting wars across the Balkans, former Yugoslav President Slobodan Milosevic, died in his U.N. cell in 2006 before tribunal judges could reach verdicts in his trial.

The ethnic tensions that Milosevic stoked from Belgrade simmer to this day.

“The legacy of war is partition, the death of multicultural idea in practice,” Vucetic said. “The society he (Mladic) and his enablers left us with is not the society most Canadians would want to live in.”

Meanwhile, the effects of these wars have been enduring and devastating, Kurtovic said.

The Bosnian government estimates that the official rate of unemployment is 44 per cent, she said.

Young people of all ethnic backgrounds are leaving the country en masse in pursuit of jobs in Western Europe and elsewhere because their futures have been stolen, Kurtovic said.

“And meanwhile, the very same people who have helped stage the war have emerged out of it as the new political and economic elite,” Kurtovic said. “Mladic is certainly a key part of the story – the executive and the executioner – but the world he helped create lives on.”