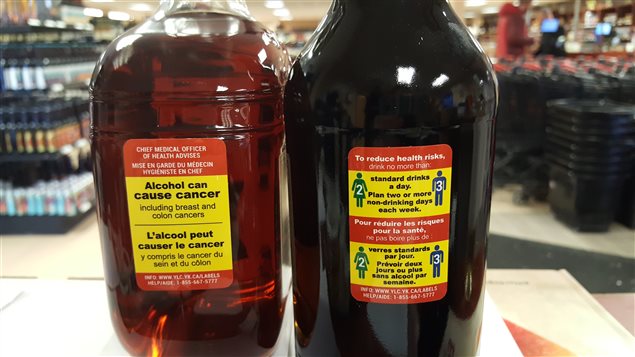 The trial labelling will have two versions of labels, one warning of cancer risks, the other advising of recommended consumption levels for men and women
Photo Credit: Govt of Yukon

Several countries around the world, including the U.K., U.S.A., Sweden and France among others have varying sizes, styles, and degrees of obligatory and voluntary warning labels on alcohol products. These often warn of the dangers of drinking while pregnant, or ability to drive or operate machinery after drinking.

This week, bottles of spirits, wines, and other alcoholic beverages will have labels warning of alcohol’s connection to breast and colon cancer while a second label is listing recommended safe consumption levels.

According to the Yukon government website, “The study is assessing local attitudes, opinions, and behaviours related to alcohol use and the effect of warning labels. A social media campaign will be launched in the coming weeks and a follow-up survey will be conducted in the spring.

The study complements both the Government of Yukon’s efforts to reduce alcohol-related harms and the Yukon Mental Wellness Strategy.

In the first phase of the study earlier this year, some 900 patrons of liquor stores in the territory cities of Yellowknife NWT and Whitehorse Yukon were asked general questions about themselves, and also about their “alcohol consumption, where they get information about alcohol, and what sort of conditions are associated with consuming alcohol”.

A similar survey will be conducted next spring after consumers in the Yukon have seen the new labels for a few months.

Unlike the more discreet labels used by other countries such as the U.S., these are large and use bright yellow to attract attention.

Data on alcohol awareness and drinking habits will be compared with data from the neighbouring Northwest Territories which has no labelling.

Some studies on alcohol labelling in other countries have shown they have had little effect, but that may be due to design and content.