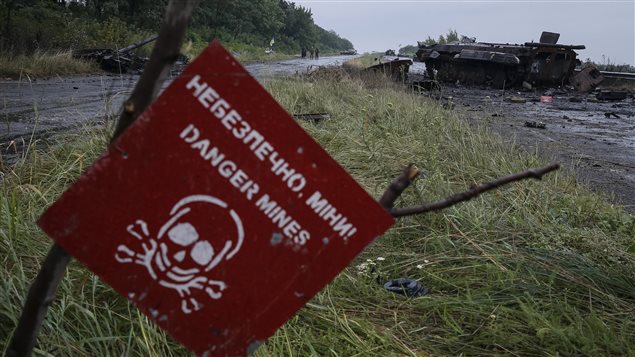 Canada pledged nearly $12 million in new funding on Monday to support mine-clearance initiatives in Syria, Ukraine, Colombia, Cambodia and Laos, marking the 20th anniversary of the Ottawa Convention to ban the devastating weapons.

Foreign Affairs Minister Chrystia Freeland said the world has had much to celebrate since Dec. 3, 1997, when 122 states signed the convention in Ottawa.

“Since the introduction of the Ottawa Treaty 20 years ago, significantly fewer people have been injured or killed because of a landmine,” Freeland said in a statement.

Banning a ‘weapon of mass destruction’

Fifty-one million landmines have been destroyed since 1997 and the treaty now has 162 state parties.

Still, landmines remain one of the most serious threats to ordinary people in Cambodia, Colombia, Bangladesh, Syria and countless other places around the world, said Lloyd Axworthy, the former foreign affairs minister who spearheaded the Canadian-led treaty twenty years ago.

“Landmines continue to be a weapon of mass destruction and there must be renewed efforts to eliminate their violent impact on the vulnerable of the world,” Axworthy said in a statement.

The HALO Trust, a humanitarian mine-clearance organization, also called for a sustained effort.

“HALO welcomes the announcement for increased funding from the Canadian government,” HALO spokesperson Louise Vaughan said in an email. “We hope that this increase will be sustained for following years until 2025.”

Removing the legacy of Daesh

The program in Syria targets mine clearance and training initiatives in the recently liberated areas held by the so-called Islamic State in Raqqa and in southern Syria, where “explosive devices have been placed in homes, schools and public areas of Syria by Daesh,” officials said in a statement, referring to IS by its Arabic acronym.

However, Ottawa’s funding for Syria will be directed only to areas under the control of the Western-friendly opposition. When asked why no funding will be provided for mine clearance operations in government-controlled areas where the civilian population faces similar threats, Canadian officials said Ottawa “prioritizes essential aid to all of the Syrian population but does not partner directly with the Syrian government.”

Canadian funding for mine action in Raqqa supports wider stabilization goals in areas liberated from Daesh by helping people return to their homes and communities, Babcock said.

In southern Syria, Canadian funding for mine action is helping secure communities by removing explosive remnants of the conflict, he said.

The Canadian funding will also go to mine action initiatives in eastern Ukraine, where as a result of the ongoing conflict in the Donbas region between pro-Russian rebels and government forces significant areas along the frontline in Donetsk and Luhansk Oblasts have been littered with unexploded ordinance and mines.

However, in contrast to the situation in Syria, the Canadian funding in Ukraine will focus on areas under the control of the pro-Western government but not the breakaway territories controlled by the Moscow-friendly rebels.

Landmines and explosive remnants of war (ERW) have caused 1,653 military and civilian casualties on both sides of the contact line since the start of the war in 2014, according to the Landmine and Cluster Munitions Monitor.

In 2016, the Monitor identified 785 mine and ERW casualties in Ukraine – 275 killed and 510 injured – with 435 casualties suffered by the military, 219 among the civilian population, including 30 children, and another 28 casualties among the deminers.

The United Nations and international demining NGOs have documented the use of landmines on territories controlled by both the government forces and the Kremlin-backed rebels despite the fact that Ukraine signed the Mine Ban Treaty prohibiting antipersonnel mines in 1999 and became a State Party in 2006.

Russia, which has one of the world’s largest stockpiles of landmines, has not joined the Ottawa Convention also known as Mine Ban Treaty.

Since the outbreak of hostilities in eastern Ukraine in early 2014, authorities in Kyiv have categorically denied using antipersonnel mines in the conflict and have accused Russian-supported forces of laying landmines in Ukraine.

However, Human Rights Watch says the numerous reports of antipersonnel mines and explosive devices used in the conflict raise serious questions about the security of the stockpile of antipersonnel mines Ukraine retained for training and research purposes under the Ottawa treaty and the possible importation of banned mines from neighboring Russia.

Global Affairs officials did not say whether Ottawa has ever raised the issue of the alleged use of banned landmines by some government or volunteer units with the Ukrainian government.

“Canada is committed to supporting the people of Ukraine and Ukraine’s sovereignty and territorial integrity,” Babcock said. “Canada supports the full implementation of the Minsk agreements, under which the parties have committed to demining.”

Ukraine has destroyed over a million landmines since 2010 and declared a stockpile of 4,911,589 antipersonnel mines in 2016, according to the International Campaign to Ban Landmines (ICBL).

However, ICBL says Ukraine has been in violation of the treaty since 2010 after having failed to complete the destruction of its stockpiles by the four-year deadline.

Since September 2015, the Canadian Armed Forces have been providing a range of training to the Ukrainian military, including in the area of detection and removal of landmines and unexploded ordinance, Canadian officials said in a statement.

“The government of Ukraine may then deploy this capability where and how they choose and where it is possible for them to operate,” he added.