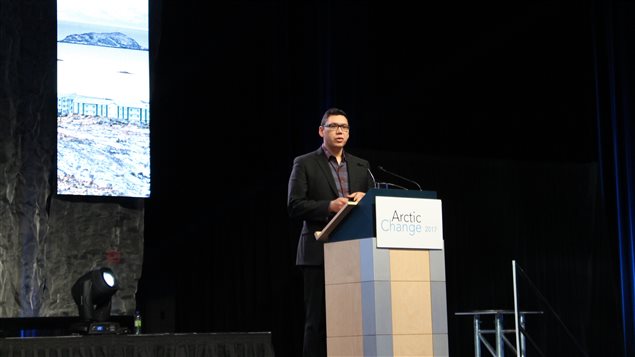 Kevin Kablutsiak, executive director of the Arctic Inspiration Prize provided highlights of the AIP’s activities at the international Arctic Change conference in Quebec City including the new prize structure that awards up to $3 million in three categories including a category for youth teams.
Photo Credit: Adam D’Agostino

An urban land-based healing program to improve mental health among Inuit, First Nation and Métis Canadians and an initiative that seeks to promote and share knowledge of traditional wild food skills in the most remote and isolated parts of the Canadian Arctic are vying for the $1 million 2017 Arctic Inspiration Prize (AIP).

The Arctic Indigenous Wellness Project and From-the-Land – Food Ambassadors Program were presented on Thursday by Kevin Kablutsiak, AIP executive director, as the two finalists for the prestigious prize at the Arctic Change conference in Quebec City, which brought together nearly 1,500 Arctic researchers, representatives of Inuit, First Nations and Northern communities, as well as governments, NGOs, and industry this week.

One of the shortlisted teams will be presented with the $1 million cheque at the Northern Lights Business & Cultural Showcase in Ottawa on Jan. 31, 2018, Kablutsiak said.

The Arctic Indigenous Wellness Project, led by Dr. Nicole Redvers from Yellowknife, combines Indigenous cultural education with traditional therapeutic interventions in a wilderness urban setting to help Inuit, First Nation and Métis at risk of suicide and incarceration. The goal of the healing program is to help improve the mental health of individuals who have fallen through the cracks of conventional support services.

The From-the-Land – Food Ambassadors Program aims to address Northern food insecurity by connecting people in the Northwest Territories, Nunavut, Nunatsiavut and Nunavik through an innovative “Northerner-tailored train-the-trainer” program, Kablutsiak said. The goal of the initiative, led by Jackoline Milne of the Northern Farm Training Institute in Hay River, is to empower food producers to share their knowledge of traditional wild food skills and sustainable domestic meat and vegetable production with northerners.

Under its new prize structure, the Arctic Inspiration Prize will award up to $3 million this year, Kablutsiak said.

To qualify for the $1 million prize a project must have “an immediate and long-term impact across a large geographical area or a profound impact in a smaller Northern area,” according to the rules.

Teams need to be nominated by arms-length third parties and have to be diverse in nature.

The prize was founded in 2012 by Arnold Witzig and Sima Sharifi. To-date, 14 teams have been awarded prizes totalling $6 million to support innovative, sustainable, multi-disciplinary projects that have long-term positive impacts in Arctic communities, organizers said.