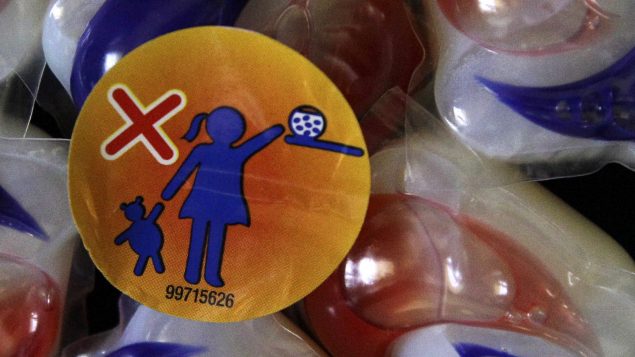 A warning label is attached to a package of Tide laundry detergent packets in Houston on Thursday, May 24, 2012. Canadian authorities are warning people to stop eating laundry detergent pods, a strange and dangerous online trend that has resulted in more than 40 hospitalizations in North America. THE CANADIAN PRESS/AP/Pat Sullivan

As stupid as it sounds, Canadian health officials are having to warn people to stop eating laundry pods and to stop challenging each other to do so. Since 2013, Health Canada issued warnings aimed at preventing very young children from eating the pods because they look like candy and little ones may not know better. But now it seems there is an online challenge  daring people to bite into a laundry pod.

Constable Robb Hartlen gives a lesson on what to eat and what not to eat, often repeating ‘don’t eat the pod.’ Photo credit: Facebook

As eastern Canadian police officer Robb Hartlen asked Canadian Press: “Seriously, do we really need to tell people what they can and can’t eat?” Hartlen has posted a video on the Facebook page of his police department in Kensington, Prince Edward Island.

In it he explains that eating a laundry pod can make you very sick and that 40 people in North America have been hospitalized for doing so.

He spends about seven minutes explaining the things one can and cannot eat: making the yes list are bananas, cookies, crackers. On the no list he shows a glove you might have found on the road, a teddy bear, a drone and laundry pods.

At the end, Hartlen notes there have been other online challenges that have gone viral for a good cause like the ALS ice-bucket challenge. He suggests people revive that idea and if they are challenged to eat a laundry pod to eat an orange instead.