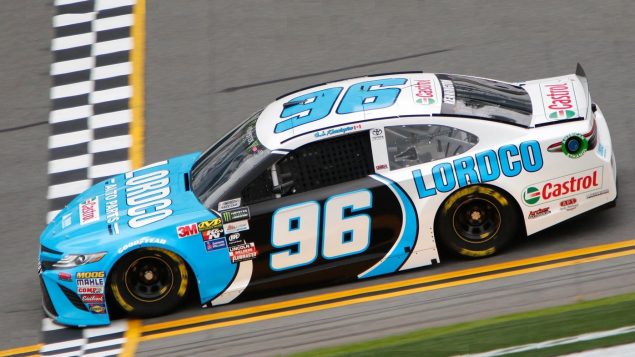 DJ Kennington in a Toyota prepped by GBR, managed to finish the gruelling Daytona 500, coming in 24th. PHOTO via Gaunt Bros Racing

A Canadian driver at the Daytona 500

Stock car racing is huge in the U.S. and arguably the biggest event of the season, is the Daytona 500, which attracts literally millions of fans and viewers each year. In 2006 the event listed 20 million television viewers

D.J. Kennington of St Thomas, in south-western Ontario, was on the grid this weekend as part in the most prestigious event in stock car racing. 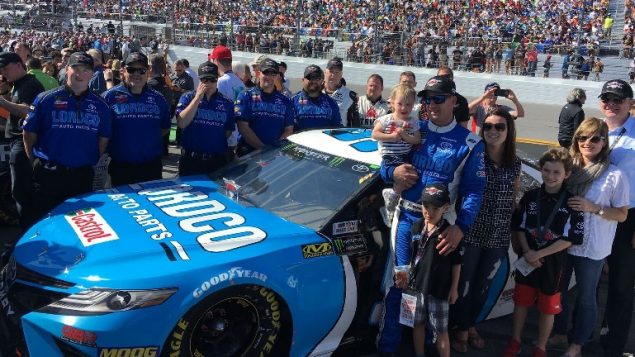 DJ Kennington with team and family at Daytona, one of the most popular races in North America. Merely qualifying takes years of experience and millions of dollars in backing. PHOTO: Castrol-Wakefield Canada/ CNW

Kennington managaed to avoid a six car pileup, but did havee damage to the front of his Toyota which spoiled the aerodynamics. In spite of that he was able to hang on to finish 24th.

In 2017 Kennington became the first Canadian to qualify for the Daytona in 29 years. The previous Canadian to race the Daytona was back in 1988 when Trevor Boys qualified, and then finished 19th

Although stock car racing is also popular in Canada, only 8 Canadians have everhe 39-year-old Kennington is a star on the Canadian circuit having more than two dozen wins, in a career of over 200 races.

Stock car racing evolved from cars that were originally close to what you could buy at a dealership, i.e “stock” not modified.  Today’s NASCAR stock cars are full blown racing cars of 750-800hp. with only the exterior bodywork resembling production models.