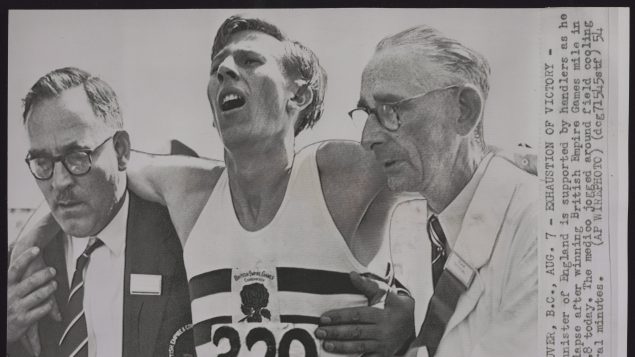 Dr. Roger Bannister of England is supported by handlers as he was near collapse after winning British Empire Games mile in a time of 3:58.8 on Aug. 7, 1954 in Vancouver. Bannister defeated Australian school teacher John Landy, who also finished under four minutes. It was the first time two runners had ever broken the once thought-to-be impossible four minute mile barrier in the same race. Three months a day previously, no single runner had ever done it once. (AP WIREPHOTO)

Roger Bannister died over the weekend at the age of 88. 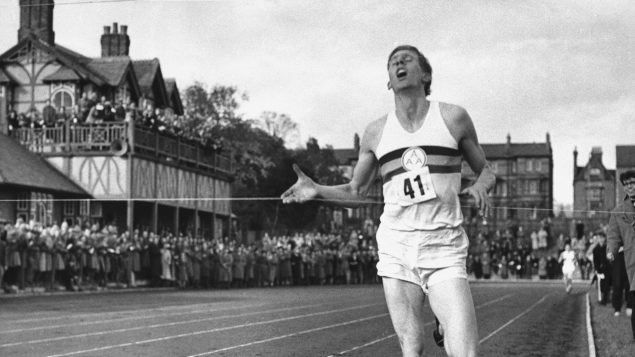 In this May 6, 1954, file photo, Roger Bannister breaks the tape to become the first man ever to break the four minute barrier in the mile at Iffly Field in Oxford, England. Bannister died peacefully Saturday in Oxford at the age of 88, surrounded by his family. (AP Photo/File)

For many of a certain age, his name will forever be linked to greatness, remembered most of all for breaking the four minute mile in a planned assault on what was then thought to be an impossible barrier at Oxford University’s Iffley Road track.

Bannister, a medical student, had been joined by two track teammates, Christopher Chataway and Chris Basher, who set the pace and pushed him to a time of 3:59.4. 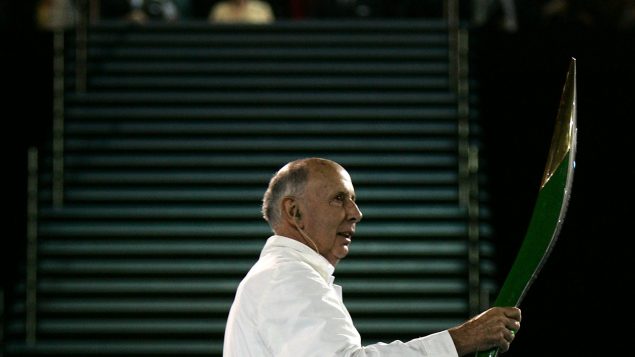 It was May 6, 1954 and Bannister instantly became a sporting icon.

And so it came to pass that what many consider to be the one of the greatest sporting events–many would say the greatest– ever held on Canadian soil took place on the afternoon of August 7, 1954.

In front of 35,000 delirious spectators, the world’s only four minute milers met for the first time, on the track of the freshly-constructed Empire Stadium at the 1954 British Empire and Commonwealth Games. 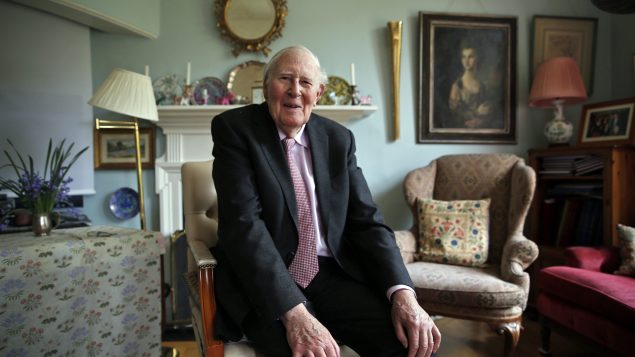 In this April 28, 2014 file photo, Roger Bannister, 85, poses during an interview with The Associated Press at his home in Oxford, England. Bannister and Landy, who is now 87, remained friends and mutural admirers after their retired from competition. (AP Photo/Lefteris Pitarakis, File)

Promoters billed it “The Mile of the Century.”

It would later be known–rightly so–as the “Miracle Mile”

Here is what happened that day. 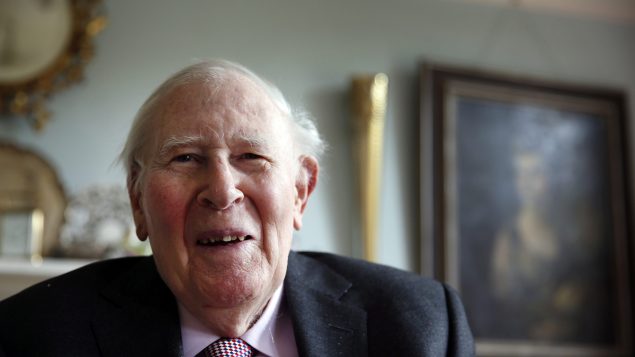 It was the first time that two runners ever ran the mile in the same race in under four minutes.

A mere three months and a day before, no single runner had ever done it once.

I was 12 when I watched that miracle mile from the basement of my home outside New York City. The memory has never left me.

Bruce Dowbiggin, who currently hosts his own website and is a noted Canadian author, journalist and radio-and-television personality, was a toddler then but had the good fortune to interview Bannister and Landy at the 1996 Victoria Commonwealth Games.

I spoke by phone with Dowbiggin at his Calgary home on Monday.