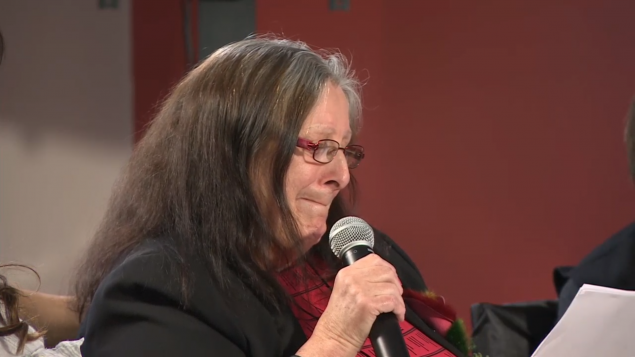 Charlotte Wolfrey, whose 20-year-old daughter Deidre Michelin was killed in a murder suicide in 1993, testifies at a hearing of the National Inquiry into Missing and Murdered Indigenous Women and Girls (MMIWG) in Happy Valley-Goose Bay, in Newfoundland and Labrador on Wednesday, March 7, 2018. (MMIWG/Facebook)

Charlotte Wolfrey’s daughter, Deidre Michelin, was just 15 days shy of her 21st birthday when she was shot and killed by her partner who then turned the gun on himself.

All four of her grandchildren were in the house when their mother’s life was snuffed out in act of senseless rage, but there wasn’t a single police officer within at least 160 kilometres of the isolated Inuit community of Rigolet on the north coast of Labrador, Wolfrey told the National Inquiry into Missing and Murdered Indigenous Women and Girls (MMIWG) in Happy Valley-Goose Bay.

“Deidre called the RCMP (Royal Canadian Mounted Police, Canada’s federal police force) all that day that she died for help,” Wolfrey told the inquiry on the first day of two-day hearings on Wednesday. “She knew she was going to die. However, the RCMP said that unless and until her partner did something, there was nothing they could do.”

Even if she could call the police when her partner took out his gun, it would have taken them at least three hours to assemble a team and find a pilot to fly into Rigolet from Happy Valley-Goose Bay – too late to save Deidre’s life, Wolfrey said in a tearful testimony.

At the time of her daughter’s murder 25 years ago, there were three Inuit communities in northern Labrador, including Rigolet, that had no permanent police presence, Wolfrey said.

Wolfrey said she became an “advocate extraordinaire”, channelling all her energy to campaign to get permanent police stations in the three northern Labrador communities.

“I wanted other women to be able to get the help they needed in a timely manner and to have protection,” Wolfrey said. “That is our right under the Canadian constitution.”

Wolfrey said she spoke out against violence against women and children and tried to bring attention to a subject that is still a taboo in many Inuit communities, Wolfrey said.

“It was really a bittersweet moment for me,” Wolfrey said. “It was a happy moment and yet at the same time I was so sad. I remember thinking how Deidre couldn’t benefit from this and I cried.”

Her personal experience and years of advocacy work left her with conviction that Canada’s justice system in the North needs a serious overhaul, Wolfrey said.

“The justice system in the North is what can best be described I think as the injustice system,” Wolfrey said.

Services for the victims and their families, as well as the offenders themselves, are woefully inadequate in most Indigenous and northern communities, she said.

The justice system moves at a glacial pace.

Wolfrey also spoke out against the use of the so-called Gladue sentencing principles in the Criminal Code, which require a sentencing judge to pay particular attention to the circumstances of Indigenous offenders and to consider all available sanctions other than imprisonment that are reasonable in the circumstances.

Restorative justice just like the traditional criminal justice is offender-focused, she said.

“I would like to see a more victim-focused and victim-driven justice system, especially when it comes to crimes of violence,” Wolfrey said.

The current restorative justice system, which many mistake with Indigenous justice, raises a lot of questions about participation in the so-called justice committees that recommend sentencing for offenders, she said.

“If there is justice committees, who’s going to choose them? Will there be criteria? What criteria? Drawn up by whom? How will it be determined if there is no conflict of interest, when everyone know everyone, and everyone knows everyone’s business in our small communities?” Wolfrey asked.

The use of sentencing circles creates a power imbalance, she said.

“Victims are facing offenders, they’re facing offenders’ families, the victim will probably be facing people she might rely on for a job,” Wolfrey said. “And when you’re a beaten woman – I know because I’ve been there – you don’t have any confidence in yourself… You don’t feel that you can say anything.”

She also spoke out the so-called “alternative measures” that allow offenders to get away with a slap on the wrist for committing crimes.

“I don’t call that justice. I think it’s a system doing this because it’s just us, people living in the Far North where everything is expensive, including a fair and just legal system.”

Canada: Lack of services in Arctic is killing Inuit, witnesses tell inquiry into violence against Indigenous women in Canada, Eye on the Arctic