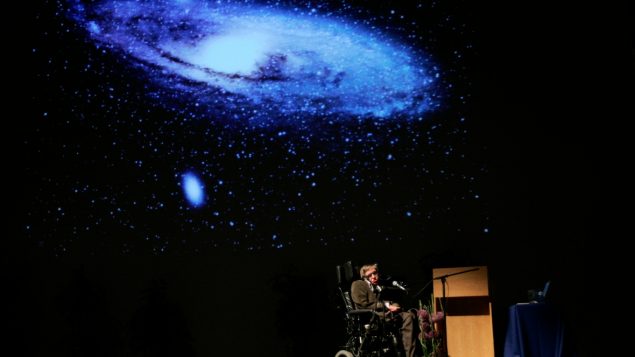 Stephen Hawking delivering a lecture on the origin of the universe in Brussels in 2007. He said the question of why the universe exists 'bothers me.' (Francois Lenoir/Reuters)

Stephen Hawking remembered by Canadian student who proved him wrong

Stephen Hawking is being remembered around the world after his death at home in Cambridge was announced in the early hours this morning.

Described as a “visionary theoretical physicist”, Hawking’s amazing mind was matched by a spirit that proved “disability” was in the eye of the beholder.

“It has been a glorious time to be alive”

Professor Raymond Laflamme, Canada Research Chair in Quantum Computing at the Perimeter Institute (PI) was a doctoral student of Stephen Hawking’s while at Cambridge.

Laflamme first met him in 1984 and and has fond memories of his time working and studying under him. 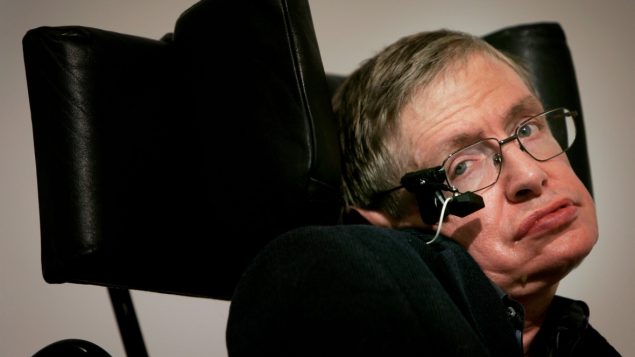 “Remember to look up at the stars and not down at your feet.” Stephen Hawking advised people. He died yesterday at the age of 76.

On CBC’s News Network he told host Suhana Meharchand, “It is a sad day, but on the other hand I think we should celebrate and reflect on an incredible life, somebody who’s totally inspiring.”

Laflamme said it was important to Hawking to communicate to the wider community, which was the motivation for his best-selling book, “A Brief History of Time”.

Laflamme said originally Hawking was afraid no one would read it. “His publisher had told him that for every equation that he would write in the book, the audience would be divided by two. He decided not to write any equations in the book and it was a total best-seller.” Laflamme recounted.

“He wrote letters of recommendation for me saying, ‘this guy has proved me wrong'”

“Stephen, although being well known, with an incredible reputation with many people looking up to him, is a scientist. and science is very democratic. At the end you discuss ideas and ideas can be right or wrong. The math in theoretical physics tells you what is right or what is wrong. So I slowly painstakingly go through the math and he would tell me “are you sure there, you did the right thing, are  you sure you did the right approximation, I would go back in my office, work for a week and then come back and tell him this is the result I got. And fortunately there’s a colleague, an ex-post doctoral fellow of Stephen’s, Don Page, who came from the University of Alberta in Edmonton, who had a very similar result to mine so we kind-of ganged up together and slowly convinced  Stephen. And when he learned that he had made a mistake, he turned around and said ‘You guys are right, what I had suggested was incorrect,’ and he was incredibly gracious.” according to Laflamme.

“He wrote letters of recommendation for saying, ‘this guy has proved me wrong’, Laflamme said. “And when I left Cambridge in 1988, after my Phd, he gave me a copy of his book, with a dedication saying, ‘To Ray, who convinced me the arrow of time was not a boomerang.”

Along with the incredible science Hawking advanced, his musings and quotes will be remembered for a long time to come.

Hawking said belief in a God who intervenes in the universe “to make sure the good guys win or get rewarded in the next life” was wishful thinking.

“But one can’t help asking the question: Why does the universe exist?” he said in 1991. “I don’t know an operational way to give the question or the answer, if there is one, a meaning. But it bothers me.”

Cambridge University uploaded a clip to YouTube today, with images and clips from Stephen Hawking, in which he says, “It has been a glorious time to be alive and doing research in theoretical physics. Our picture of the universe has changed a great deal in the last 50 years and I’m happy if I’ve made a small contribution.”

“However difficult life may seem there is always something you can do and succeed at; it matters that you don’t just give up.” Hawking said, powerful advice from a man who was the embodiment of it.

“He was a great scientist and an extraordinary man whose work and legacy will live on for many years,” his children Lucy, Robert and Tim said in a statement. “His courage and persistence with his brilliance and humour inspired people across the world. He once said, ‘It would not be much of a universe if it wasn’t home to the people you love.’ We will miss him forever.”