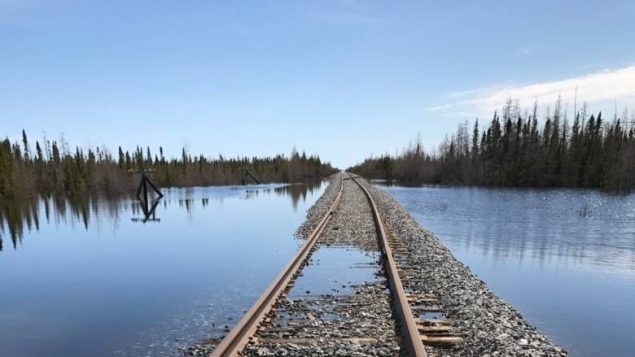 Churchill rail line in Manitoba flooded out last spring leaving 14 wash-outs like the one above, all yet to be repaired. (Omnitrax/CBC)

Churchill, Manitoba, 1,000 kilometres north of the capital, Winnipeg, may eventually be connected to the southern region of the province again, following the news last Friday of a potential sale of the railway.

Fairfax Financial Holdings Ltd. of Toronto and a First Nations consortium partner, Missinippi Rail LP, have been negotiating for months with Omnitrax to purchase the railway, and the port in Churchill.

Meanwhile another First Nations consortium and another Canadian company, iChurchill, announced they had entered “into [an] agreement to acquire Hudson Bay Railway and Port of Churchill from [its] U.S.-based owner”, according to a report in the Globe and Mail on May 4th, 2018

The line runs from The Pas, Manitoba, north to Churchill, and is officially known as The Hudson Bay railway.

But a boom and bust history, and the perils of climate change may now shut the line down permanently. 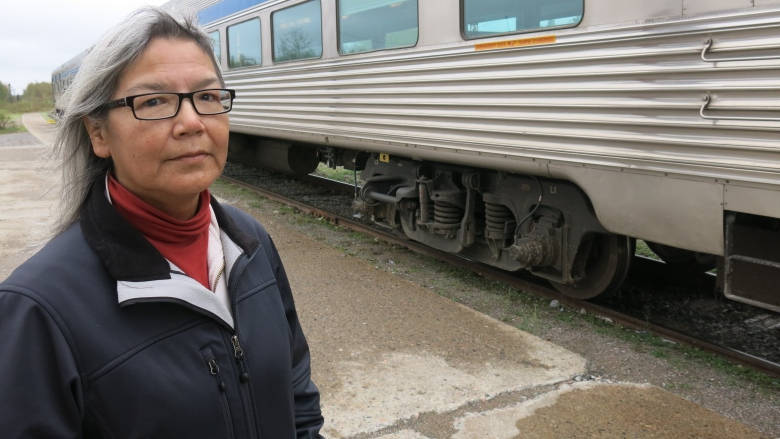 Churchill railway: Chief Betsy Kennedy of War Lake First Nation in Ilford, is part of the coalition of Manitoba chiefs and municipal leaders working to take over the Hudson Bay Railway from OmniTrax. (Selena Ross/CBC)

After long-term planning the only deep water port in the prairies, was opened in 1931.

It was an active place during the shipping season between July and November, getting the grain harvest out to international destinations.

Since the dissolution of the Wheat Board in 2015, farmers have been free to sell their crops individually, and east-west ports were favoured. The northern Port of Churchill eventually became obsolete.

Omnitrax refused to repair the track citing an estimated expense of $60 million (Cdn),

Since then, the northern communities that depended on it, spent the last year making contingency plans for the transport of food and all other necessities, by air. a very expensive undertaking.

Timing is essential in any deal as the track must be repaired before this coming winter.

With less than 900 full-time residents now, people were proud of Churchill’s title as ‘the polar bear capital of the world’, and welcomed the tourists that came to visit.

The community, at the mouth of the Churchill River, on the northwestern shore of Hudson Bay, was also a popular destination for those wanting to take in the wonder of the Northern Lights, as well as whale watching the belugas.