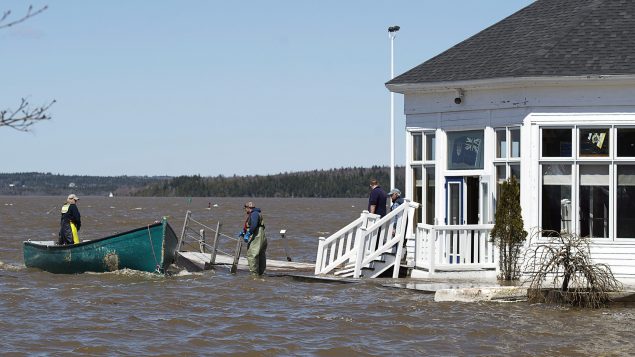 Sailors prepare to secure a work boat at the Royal Kennebecasis Yacht Club in Saint John, N.B. on Saturday, May 5, 2018. Swollen rivers across New Brunswick are still rising, flooding streets and properties and forcing people from their homes in several communities. (Andrew Vaughan/THE CANADIAN PRESS)

Floodwaters in southern New Brunswick to continue to rise until Tuesday

Record-breaking floodwaters that have deluged huge swaths of southern New Brunswick are expected to keep rising for one more day before beginning to stabilize, provincial officials said Monday.

Geoffrey Downey of the Emergency Measures Organization (EMO) said water levels along much of the Saint John River had already stabilized. The level in Fredericton has not been below 8.0 metres — or 1.5 metres above flood stage — for 10 days, but is expected to drop to 7.3 by Wednesday, he said.

The EMO continues to monitor water levels on the Madawaska River, which increased over the weekend due to outflow from the Temiscouata Dam in Quebec and high water levels of the St. John River, he said.

However, the outflow appears to no longer represent a risk to residents in the region and should not have an impact on the water levels of the St. John River, officials said.

Downey said it will take days before water in most of the river’s lower basin begins to recede. 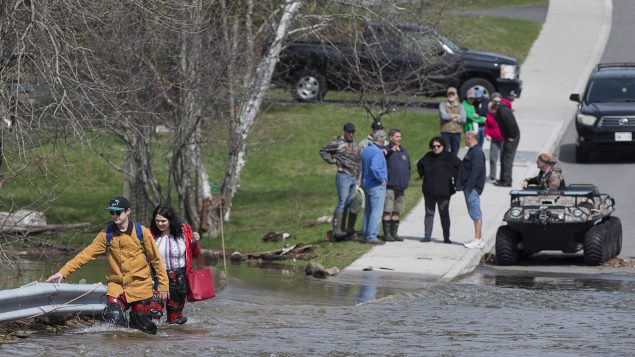 EMO officials also urged residents to continue to be vigilant and avoid any activities water, which has been heavily polluted by overflowing sewage and other pollutants.

“It’s a beautiful day but we don’t want folks boating because there is still a lot of concerns about the river,” said Greg MacCallum, director of the EMO. “The currents are very strong and there is virtually any kind of debris imaginable floating in our river system.”

“When we talk about the water going down, that is not a trigger for people to go home necessarily,” MacCallum told reporters at a media briefing.

“A very deliberate process has to be followed to make sure it’s safe for them to go home… In some cases, it may be a matter of days after the water levels are below flood stage, in some cases, it will be weeks.”

MacCallum said recovery teams are being put together, and he declared the clean-up will be a “difficult phase.”

“It’s a phase of discovery based on inspection, based on a lot of considerations about what is safe to be done and what needs to be done to return to normalcy,” said MacCallum.

To date, 488 households consisting of 1,158 people have registered with the Red Cross, officials said.

The Red Cross has launched a fundraising effort to assist flood victims.

The Royal Canadian Mounted Police said officers arrested three men in their 20s, who had allegedly used a canoe in an attempted theft from a flooded home in the Maugerville area near Fredericton. The owner of the home, who was inside at the time, surprised the intruders and gave chase, forcing the would-be thieves to flee empty-handed.

The Trans-Canada Highway between Fredericton and Moncton in both directions remains closed, and floodwaters have cut off all roads in and out of the community of Chipman, but Downey said crews are working to upgrade a route so that emergency vehicles have access to the community.