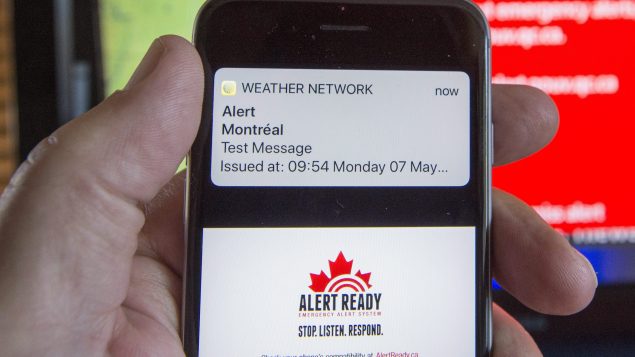 Operators of Canada’s new emergency alert system say they are learning from the failed tests earlier this week in Ontario and Quebec.

And Alert Ready officials say tests planned for today in other parts of the country will go ahead while they work to resolve glitches in the system.

A spokesperson for the company behind the system said the first alert test on Wednesday in Newfoundland and Labrador worked.

“Wireless service providers have verified that the test message was successfully distributed across their LTE wireless networks in the province,” said Emily Ngai.

The alert, however, was a few minutes late and anecdotal reports suggest it might not have reached all users.

The tests are being conducted after the Canadian Radio-television and Telecommunications Commission (CRTC) ordered wireless providers to implement the system to warn of imminent safety concerns such as tornadoes, floods, alerts on missing children or terror threats.

Mobile users in Ontario and Quebec were supposed to receive alerts on their devices Monday as part of a test of the regulator-mandated warning system, which was supposed to be fully in place by April 6.

No alerts were registered on devices in Quebec, while only some mobile subscribers in Ontario received the signal.

CRTC spokesperson Patricia Valladao told Radio Canada International the glitch did not originate with cellphone service providers but rather between emergency management in Quebec, which generates the content of alerts, and Pelmorex Corp., a company that operates the distribution system.

Valladao said that Pelmorex informed the CRTC that the glitch was apparently caused by an extra space in a code sequence that was entered manually by a Pelmorex employee, which prevented the system from sending the message in Quebec through wireless phones. ​

“A space incorrectly included in the coding prevented the Alert Ready System from sending the Quebec test message to compatible wireless devices earlier this morning,” said a statement from Pelmorex.

The Quebec test did broadcast successfully on TV and radio, the statement said.

“The purpose of a test alert is to comprehensively verify all system components so that in the case of a real threat to life situation, there is confidence the emergency alerts will be distributed successfully,” the statement said. “The misconfiguration was quickly corrected.”

The test in Ontario went on at 1:55 p.m., and while some mobile phone users reported having received an alert, others said their phone remained silent throughout the test.

Pelmorex said it’s still trying to figure out what happened in Ontario.

Test signals are also expected to sound on radio and TV stations today in provinces and territories outside of Ontario and Quebec, except Nunavut.

Here are the times for tests scheduled for today. All times are local: