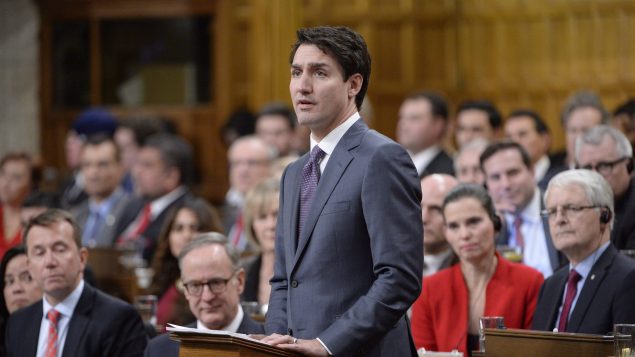 Prime Minister Justin Trudeau makes a formal apology to individuals harmed by federal legislation, policies, and practices that led to the oppression of and discrimination against LGBTQ2 people in Canada, in the House of Commons in Ottawa, Tuesday, Nov.28, 2017. (Adrian Wyld/THE CANADIAN PRESS)

Canada’s $200,000 contribution to the U.S.-administered public-private partnership will be designated specifically to provide emergency assistance to LGBTQ2 persons under threat of violence, officials said.

Apart from Canada and the U.S., the fund’s partners include Argentina, Australia, Chile, Croatia, Denmark, Finland, France, Germany, Iceland, Italy, Montenegro, the Netherlands, Norway, Sweden, and Uruguay, as well as a number of international corporations and foundations.

The announcement came as the world marks the International Day Against Homophobia, Transphobia, and Biphobia.

“On the International Day Against Homophobia, Transphobia, and Biphobia, we join Canadians and people everywhere to call for a world free of stigma, persecution, and discrimination,” Prime Minister Justin Trudeau said in a statement. “Everyone deserves the same rights and opportunities in life no matter who they love or how they identify.”

As the current co-chair of the Equal Rights Coalition (ERC), Canada is working alongside states, civil society, and international organizations to combat discrimination and violence against LGBTQ2 people, Trudeau said.

Canada will be hosting the ERC Global Conference on LGBTI Rights and Inclusive Development in Vancouver in August, Trudeau said.