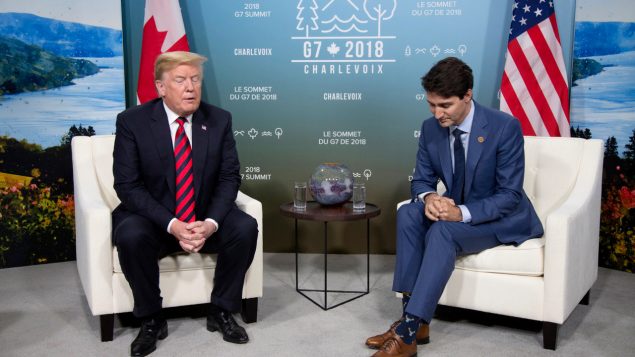 Canada’s opposition parties rally around Trudeau in dispute with Trump

In a rare show of solidarity with the Liberal government opposition parties in the House of Commons rallied around Prime Minister Justin Trudeau on Monday in the face of a barrage of personal insults levelled at him by U.S. President Donald Trump and some of his officials.

In response to these attacks, the House of Commons unanimously agreed to a motion presented by New Democratic Party MP Tracey Ramsey, rejecting “disparaging ad-hominem statements by U.S. officials, which do a disservice to bilateral relations and work against efforts to resolve this trade dispute.”

Today I introduced a Motion in the House of Commons calling for all parties in Parliament to stand together, united as one during this difficult moment with our US neighbours. Proud to see unanimous consent from all sides. #TrueNorthStrong ?? pic.twitter.com/upVRNklAiW

The motion also strongly opposes the “illegitimate tariffs imposed by the United States government against Canadian steel and aluminum workers” and voices collective support for Canada’s supply management system for dairy and poultry industries, which has become the target of Trump’s ire lately.

Trump lashed out at Trudeau, the European Union and NATO allies in a series of tweets on Monday in the wake of a divisive G7 meeting in Canada over the weekend.

‘Fair Trade is now to be called Fool Trade’

The escalating clash over trade between Washington and some of its closest global partners, including Canada, came as Trump arrived in Singapore for a crucial summit with North Korean dictator Kim Jong Un.

“Fair Trade is now to be called Fool Trade if it is not Reciprocal. According to a Canada release, they make almost 100 Billion Dollars in Trade with U.S. (guess they were bragging and got caught!). Minimum is 17B. Tax Dairy from us at 270%. Then Justin acts hurt when called out!” tweeted Trump, without specifying where he got those numbers and which Canadian statement he was referring to.

Trump has admitted in the past that he has made up numbers in his conversations with Trudeau to try to extract trade concessions from him during the renegotiations of the North American Free Trade Agreement.

The United States had a goods and services trade surplus with Canada totalling 8.4 billion dollars in 2017, according to the Office of the U.S. Trade Representative.

“(Trudeau) really kind of stabbed us in the back,” Kudlow said on CNN’s “State of the Union.”

“There’s a special place in hell for any foreign leader that engages in bad faith diplomacy with President Donald J. Trump and then tries to stab him in the back on the way out the door,” Navarro told “Fox News Sunday. 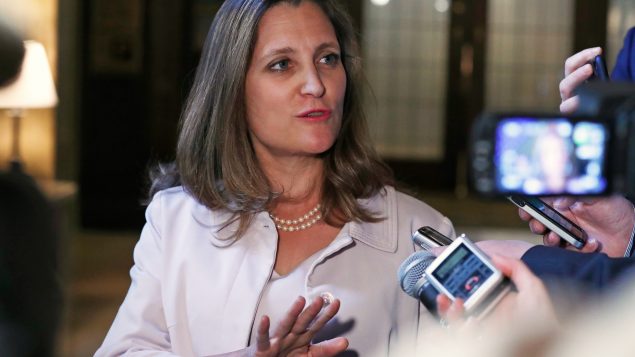 On Sunday, responding to these statements, Foreign Affairs Minister Chrystia Freeland said Canada “does not believe that ad hominem attacks are a particularly appropriate or useful way to conduct our relations with other countries.”

“For me what is insulting and what I object to very strongly is the illegal and unjustified imposition of tariffs on Canadian steel and aluminum,” Freeland said. “The national security pretext is absurd and frankly insulting to Canadians, the closest and the strongest ally the United States has had. We can’t pose a security threat to the United States and I know that the Americans understand that.”

Freeland had a lengthy conversation with U.S. Trade Ambassador Robert Lighthizer Sunday evening, but the series of tweets were not on the agenda, according to a senior government official.

“Tariffs, not tweets” were discussed, according to the official, who spoke on the condition of anonymity.

Freeland will get a chance to push her point of view again on Wednesday as she travels to Washington to meet with members of the United States Senate Committee on Foreign Relations.

Freeland will also be presented with Diplomat of the Year Award by the Foreign Policy magazine and deliver a keynote address on international relations.

With files from The Canadian Press, The Associated Press and Reuters