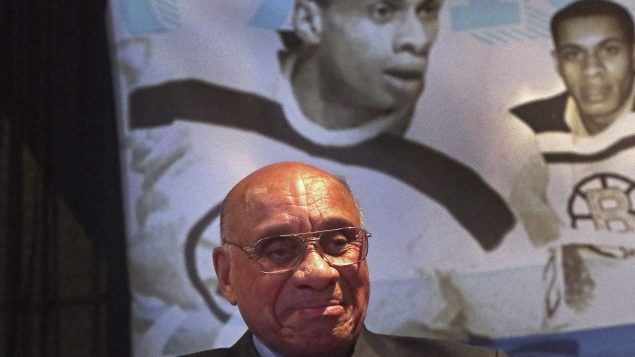 National Hockey League Diversity Ambassador Willie O'Ree, the first black player in the NHL, was honored during a ceremony in Boston on Wednesday, Jan. 17, 2018. The ceremony was attended by Boston Mayor Marty Walsh, NHL commissioner Gary Bettman and Boston Bruins Chief Executive Officer Charlie Jacobs, who joined together at TD Garden to announce that the Boston Parks and Recreation Department's street hockey rink is named in honor of O'Ree. (Barry Chin/The Boston Globe via AP)

Willie O’Ree in the Hockey Hall of Fame

Willie O’Ree is having some well-deserved time in the spotlight, with yesterday’s announcement that he is among this year’s inductees into the Hockey Hall of Fame

“I am so happy and feel so fantastic”

O’Ree, now 82, was the first black player in the National Hockey League,

He made his debut, playing for the Boston Bruins against the Montreal Canadiens on January 18, 1958. Boston won 3-0

In an interview yesterday with Kevin Bisset of the Canadian Press, O”Ree said “he didn’t realize the significance of the match until reading a newspaper the next day, which confirmed he had broken the NHL’s colour barrier.”

He didn’t play long, finishing the 1960-61 season after 43 games with the Boston Bruins. But he never left the game.

He went on to run a children’s hockey school, and has been one of  the “Diversity Ambassadors” for the NHL for over 20 years now.

“It’s been a long time coming” Nicole Mortillaro says of this most recent honour. 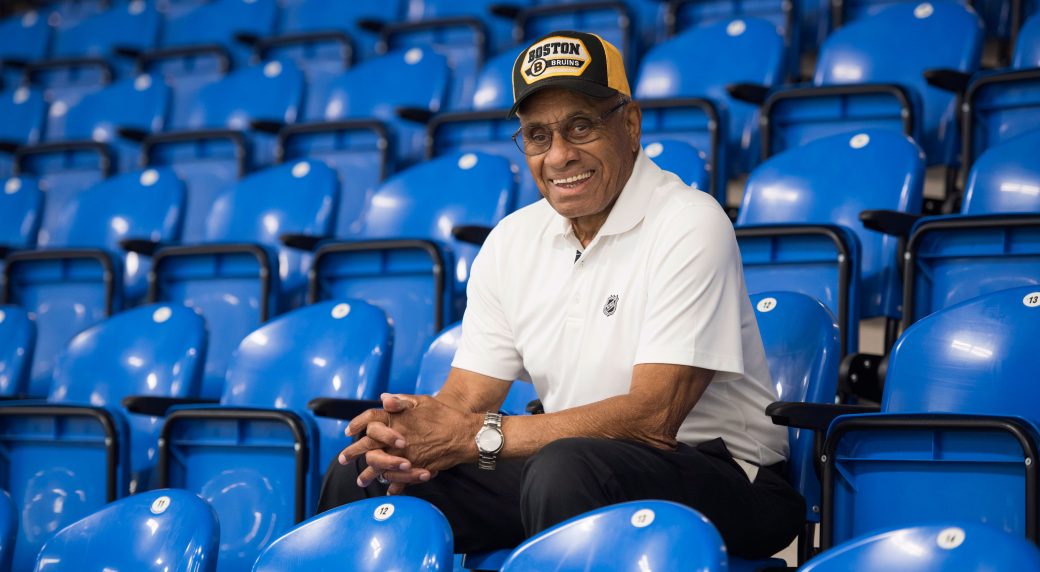 O’Ree shown here in the state of the art sports complex named “Willie O’Ree Place”, in his honour in his hometown of Fredericton, New Brunswick. (Stephen MacGillivray/CP)

Nicole Mortillaro wrote, “Willie O’Ree: The Story of the First Black Player in the NHL”.

She says, “O’Ree is often called the ‘Jackie Robinson of Hockey’, he says he doesn’t think of himself that way, but he did, he opened the door.”

And O’Ree did it after being so badly injured in the minor leagues that he was left blind in one eye.

O’Ree was a great athlete, excelling at baseball as well as hockey in his youth. It was the result of a baseball championship that O’Ree found himself in New York City meeting Jackie Robinson for the first time. When he met him later in life, Robinson remembered him.

Mortillaro, who is mixed-race, of Guyanese and Italian background, was personally inspired to tell O”Ree’s story.

“It was another 16 years before we saw the next black player, play in the NHL, and I wanted other kids to be inspired by his story, and to go out and to play and know that they can do it themselves, and it’s not only applicable to hockey or sports but in other things, that they can be the first.” she says.

“I am so happy and feel so fantastic,” O’Ree told Bisset from his home in San Diego. where he got the call, telling him, he’ll be in the Hall of Fame.

O’Ree will not be breaking a barrier this time, When he is inducted in November he will be joining Edmonton Oilers goalie Grant Fuhr and Angela James, the Canadian women’s national team captain,