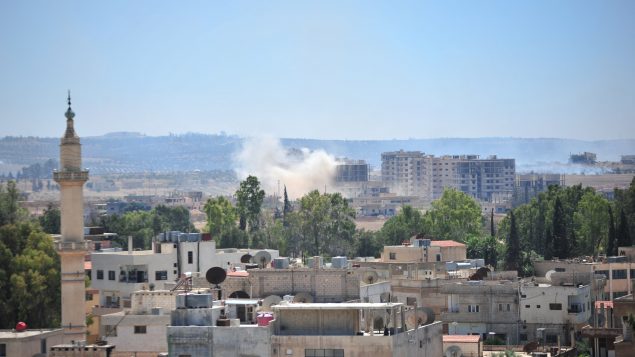 Smoke rises from the southeast part of Deraa, Syria in this handout released on June 27, 2018. (SANA/Handout via REUTERS)

Canada is gravely concerned by the Syrian regime’s offensive in southwest Syria that has uprooted tens of thousands of people since it began last week amid warnings by the United Nations that civilians trapped between warring sides face a humanitarian catastrophe, says Foreign Affairs Minister Chrystia Freeland.

The Russian-backed offensive has killed at least 98 civilians, including 19 children, since June 19, the Syrian Observatory for Human Rights said.

“The regime’s actions and those of its ally—Russia—are having a catastrophic impact on civilians, including the displacement of tens of thousands of people,” Freeland said in a statement.

“Canada calls on the Syrian regime to immediately end the violence and to allow for rapid and unimpeded humanitarian access, and urges all parties to the conflict to respect their obligations under international humanitarian law.”

Canada also calls on Russia to uphold the commitments it made to help maintain a de-escalation zone in the area, Freeland added. 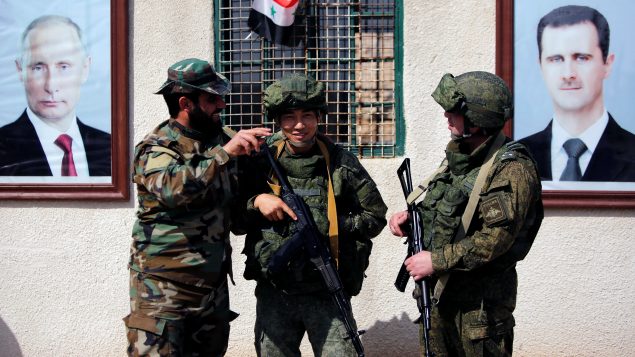 Syrian and Russian soldiers are seen at a checkpoint near Wafideen camp in Damascus, Syria March 2, 2018. (Omar Sanadiki/REUTERS)

Speaking at a news briefing in Moscow on Thursday, Russian foreign affairs ministry spokesperson Maria Zakharova blamed Western countries for failing to uphold their end of the de-escalation agreement and fight ISIS and the al-Qaeda offshoot Jabhat Al-Nusra Front in southwestern Syria, which she accused of shelling government-controlled areas in Daraa and Suwayda.

Russia has not withdrawn from the memorandums on the de-escalation zone in southwestern Syria, which it signed with the United States and Jordan on July 7, 2017 and Nov. 8, 2017, Zakharova told reporters.

“We reaffirm the need to comply with the provisions of these memorandums, in particular, on fighting Jabhat al-Nusra and ISIS terrorists and eradicating their presence in the de-escalation zone,” she said. “What the Syrian Army supported by Russia’s Aerospace Forces are doing now should have been done long ago by our American partners.” 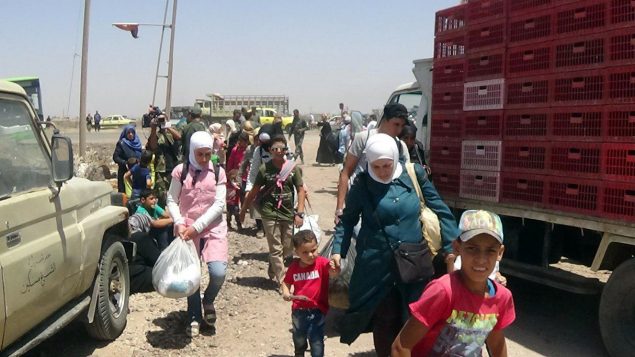 People walk as they hold their belongings in Deraa countryside, Syria in this handout released on June 28, 2018. (SANA/Handout via REUTERS)

The fighting has also driven tens of thousands of people toward the border with Jordan and thousands more to the frontier with the Israeli-occupied Golan Heights, according to the United Nations.

Israel and Jordan – which is already hosting 650,000 Syrians – say they will not let refugees in.

Jan Egeland, senior adviser to the UN Special Envoy for Syria, told reporters in Geneva on Thursday that the fighting has also cut vital cross-border aid deliveries from neighbouring Jordan.

“Our appeal goes to Jordan, one of the most generous recipient of refugees on earth, that they keep borders open for people fleeing south,” he said. “There is no other place to go”.

Egeland stressed the dangers of all-out fighting in a region where there are an estimated 750,000 civilians many of whom have already been displaced by previous fighting.

“We urge…again, the Russians, the Americans, the Jordanians were able to do it last July, they can do it again today,” Egeland said. “There are many more babies than there are so-called terrorist fighters in the zone and the children have the right of protection against attacks.”

There had been more than 700 attacks on health facilities since the start of the war – “more than in any other war of our time,” Egeland said.

Freeland said Canada continues to pursue accountability for those responsible for war crimes and crimes against humanity in Syria.

“We will also continue to provide humanitarian assistance for the most vulnerable people of Syria,’’ she said.