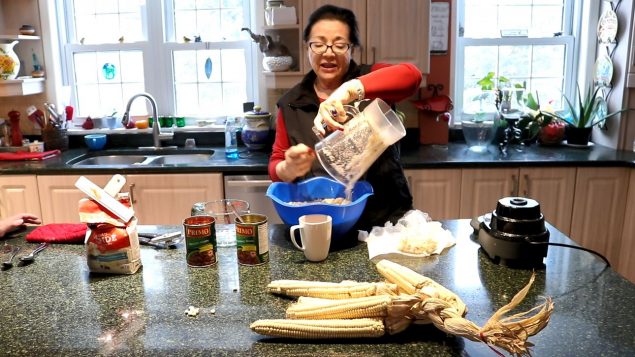 RCI was invited at Chief Christine Zachary-Deom home, in Kahnawake, for a Mohawk traditional meal. Our host had a lot to say about the culinary traditions of her community and how the Mohawks helped the French to survive with hominy, a food produced from the nixtamalization of dried corn kernels. Photo: Marie-Claude Simard/RCI

White corn or the taste of Mohawk hospitality

Chief Christine Zachary-Deom is a member of the Mohawk Council of Kahnawake and also an excellent chef in her home.

Every Sunday she cooks a traditional Mohawk meal for family and friends. Hominy − dried white corn kernels softened through an ancient process known as nixtamalization − is at the heart of her cooking.

Kahnawake is a Mohawk community on the south shore of Montreal. After mass at the St. Kateri Tekakwitha Church, Christine rushes back to her home to put the final touches to the meal. This includes corn soup, cornbread, and burnt-flour tea gravy, recipes she learned from her mother. (See recipes at bottom)

On February 25th, Radio Canada International was invited to her house and got a great taste of Mohawk hopitality.

The feast started with a hefty Mohawk corn soup. A meal in itself! Image: Marie-Claude Simard/RCI

Her mom, ‘the cornbread lady’

Cornbread brings back vivid childhood memories to Chief Zachary-Deom who helped her mother to make and sell the bread. She says her mom was known in Kahnawake as the “cornbread lady”.

“It reminds me so significantly of my mother and how we lived. Friday night, she would start preparing for Sunday’s meal, using the corn that we grew. Sunday morning, every one was at the door buying!”

In the home, everybody participated in this weekly event which started with the nixtamalization of the corn, a family ritual which lasted two days. Watch the video:

“It takes scientific innovation to understand how to change these tough kernels into hominy, so tender and beautiful!” says our host, holding a handful of dried corn kernels, which are as hard as little pebbles.

In order to obtain hominy, the process of nixtamalization consists of boiling the dried kernels in a solution of water and wood ashes. After a few hours in this boiling alcaline mix, the kernels become soft and their nutritional value increases. The result is a bigger white grain called hominy or nixtamal, or mote, in Latin America.

“My mother used to gather the corn kernels and put them in a big pan. Then she added sifted wood-ash and water. And it became like grey wood-ash water, thick, you would never eat it! You cook it for about 2 hours than you empty the corn in a pale of clean water. You keep washing the corn with clean water over a sifter until the kernels become bright white and very soft.”- Christine Zachary-Deom 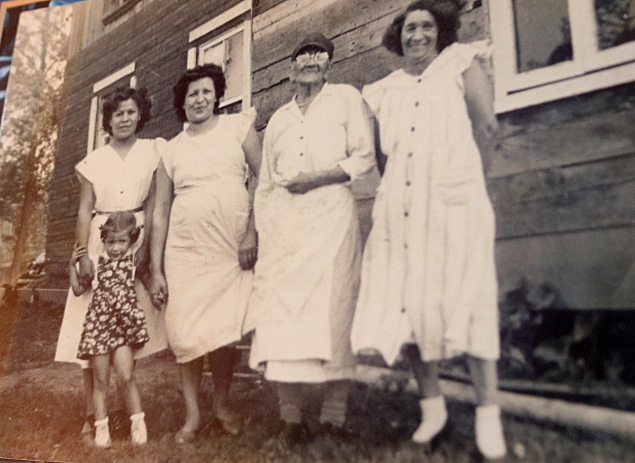 Our host told us about growing up on the Zachary farm in Kahnawake, the harvest parties and the cooking that went on with her mom and relatives. Photo of an old family picture hanging on her wall. By Marie-Claude Simard/RCI

The cleaning was the hardest part, according to Chief Zachary-Deom, because there was no electricity nor running water in the house.

“My brother wasn’t happy. He had to pump water, and bring the water in, alot, Friday and Saturday. Because, it takes a lot to cook, and then to wash”, she says.

Made from hominy, oats and kidney beans, the bead dough is then shaped in balls and thrown in boiling water to be cooked. Photo: Marie-Claude Simard/RCI

The French survived on Mohawk food

Chief Zachary-Deom is quite clear on an important historical point. She says the early French explorers and settlers could not have survived if they hadn`t adopted the Mohawk food traditions.

At the time, the island of Montreal was covered with Mohawk corn fields, she says. Watch the video:

“They started observing the Mohawks processing the corn. That’s what the French learned. To hang their corn and save their ashes. Whenever they found a piece of hard corn, they knew they could eat.” Christine Zachary-Deom

In her childhood at the Zachary’s former 100-acre farm, the corn was harvested and hung on the rafters of the house.

“I remember the harvest parties. And the cooking that went on at my great grand-mother’s house. They would tell stories that weren’t meant for kids! “

The farm was fulI of corn, beans and squash, she adds. These three foods are referred to as the “three sisters” and are at the heart of Mohawk traditional cooking. They can be found in the delicious Mohawk corn soup that she served us.

“It looks like minestrone so you can call it Mohawk minestrone, if you want! This is one of the best foods in the community. People are crazy for it, and we add a lot of corn to it.” − Christine Zachary-Deom

The day before serving it, Christine prepares the broth. She puts four pork hocks in a big pot, and fills it with water. She brings the water to a boil and lets the meat simmer for about three hours. Then she refrigerates it.

The next day, after taking away the fat that formed on the surface, she adds hominy, red beans, and a choice of vegetables: squash, carrots, turnips, cabbage and sweet potatoes.

How to make Mohawk cornbread

In the cornbread recipe, two of the “three sisters” are used: hominy and red beans. The hominy is made into a paste in the blender. Oats and corn meal are also used. By adding boiling water to the dry ingredients, the mix becomes a soft dough which is shaped into balls and then cooked in boiling water for about 20 minutes.

The bread is very nourrishing. “When we went to hunt, we took the bread with us. That’s why we were fast, we didn’t have to do all sorts of hunting on the way!”.

During the Sunday meals at Chief Christine Zachary-Deom’s home, the bread is served with the meat and gravy. “It acts like a potato”, says our host.

The guests love to dunk their bread in Christine’s delectable burnt-flour tea gravy. After cooking the steaks in a pan, she mixes the drippings with a little bit of flour and gradually adds some black tea to the mixture.

“Instead of adding water to the drippings, you add black tea. Preferably day old tea. You have to stir the whole time. I don’t know if I did this well enough. My mother would have a fit!”

Chief Zachary-Deom is not completely happy with the texture of her gravy. No doubt she’s a perfectionnist: the caramel coloured sauce greatly enhances the flavour of the meat and bread, and tops a scrumptious meal the Mohawk way! 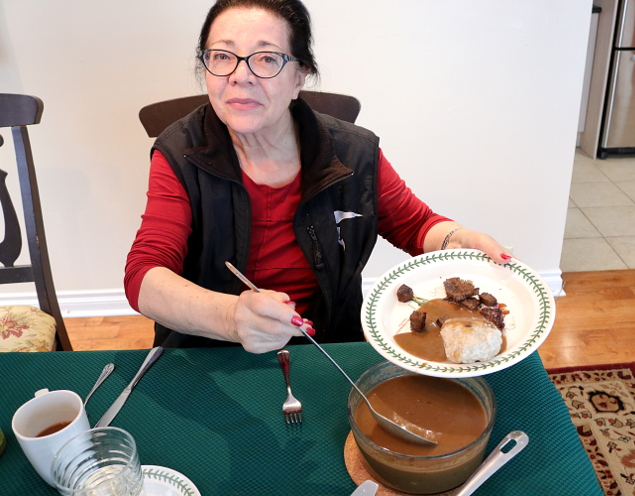 THREE MOHAWK RECIPES
Hominy, also called nixtamal or mote in Latin American countries can be bought in tins in various Latin American groceries in Canada or at the Eagle’s Nest Convenience and Deli in Kahnawake.

Measurements are approximative, so use your intuition!

Mohawk corn soup
Ingredients:
4 pork hocks (or another meat with bones)
8 cups water (approximative)
2 cups hominy (frozen or from a tin)
1 tin red beans
Selection of vegetable to taste: squash, carrots, cabbage, turnips, sweet potato
Salt and pepper
Preparation:
The day before, prepare the broth. Put the meat and bones at the bottom of a large pot and fill it with water leaving room to add vegetables later. Bring to a boil and simmer for 3 hours on low heat. Let cool, then refrigerate. The following day, remove the fat from the surface of the broth, (or keep a little bit for taste).
Heat the broth and add the remaining ingredients, vegetables, beans and hominy. Add salt and pepper. Let simmer for another hour until the vegetables are cooked and the aroma fills the room. Add more salt and pepper to taste.

Mohawk cornbread
Ingredients:
2 cups hominy (passed through the blender)
2 cups oatmeal (instant)
2 cups pre-cooked white corn meal
1 cup red beans
salt and pepper
boiling water
Preparation:
Mix the dry ingredients in a big bowl. Add boiling water, slowly, while stirring, until the dough is thick enough to mold into balls the size of oranges. Bring a potful of water to a boil. Place the balls into the water, and cook for approximately 20 minute on medium heat.
Serve with main course. The next day, leftover breads can be reheated and served with butter, jam or other spreads.

Burnt-flour tea gravy
Ingredients:
Drippings
1 or 2 tablespoons of white flour
Black tea (preferably day old)
salt and pepper to taste
Preparation:
Save the drippings from the steaks or other meat. Remove the meat from the pan, and the add the flour to the drippings. On medium heat, stir constantly with a whisk, until you obtain a uniform paste. Slowly add the tea while stirring until you get the quantity and texture desired.

Marie-Claude Simard writes a column called Cuisine Je me souviens which is published in RCI’s French section. Different people tell her about dishes from their childhood and the memories attached to them.