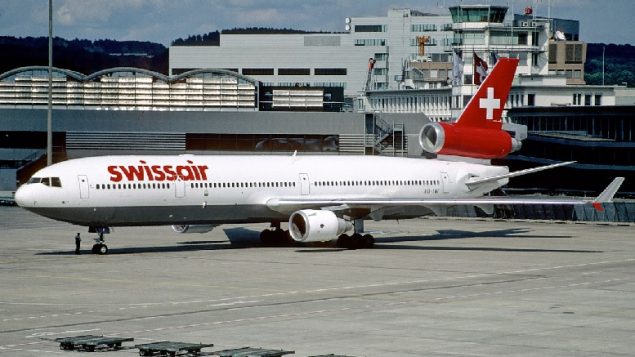 This Swissair MD-11 shown in Zurich in July 1998 just months before it crashed off the coast of Nova Scotia killing all on board, Sept 2. 1998. (Aero-icarus-WikiCC)

Everything seemed so normal on the evening of September 2, 1998 at the JFK International airport in New York.  Regular flyers on the New York to Geneva flight were relaxed and maybe bored, first time passengers were perhaps a little excited, and the very experienced cockpit crew calm as they performed routine duties as the large 3-engined MD-11 plane lifted off.

It was just after 8PM EDT.  Shortly afterward out over the ocean the pilots indicated there was a problem, but not serious. An hour after takeoff they decided to divert and land at Halifax Nova Scotia.

Within minutes the crew signalled an emergency as systems aboard the plane began to fail. Air traffic control suddenly lost contact as the jet with 215 passengers and 14 crew hurtled into the sea at high speed and disintegrated just a few kilometres off the Nova Scotia coast at Peggy’s Cove, near Halifax. 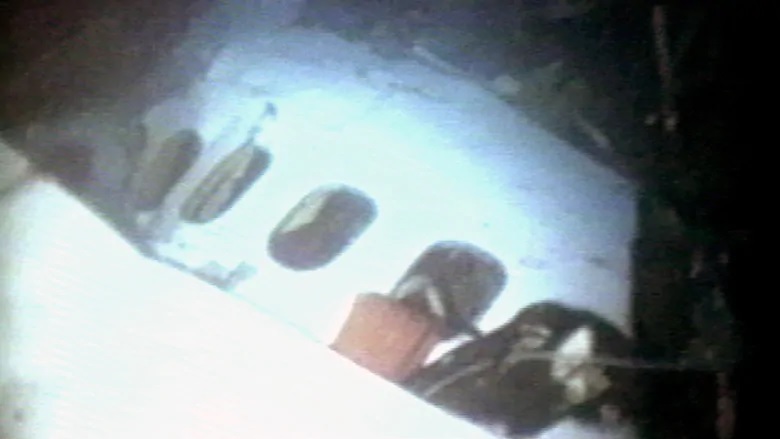 Underwater image of portion of the plane lying on the ocean floor about 50 metres deep. Much of the plane was reduced to much smaller bits (via CBC)

Local fishermen and rescuers were on the scene quickly but it was soon obvious there was no-one to rescue. Recovery began, and the bits and pieces began to be pulled from the ocean floor about 50 metres down.

The flight recorder data proved useless as it had stopped recording a few minutes before the crash.

The long and painstaking task of rebuilding the aircraft to determine what happened began in a hangar, along with the tragic task of identifying remains, mostly through dental records and DNA analysis. 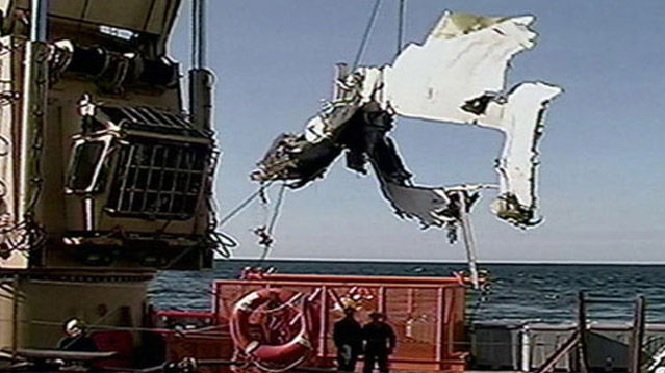 Special equipment was brought in to recover wreckage (via CBC)

It is now well-known the plane carried millions of dollars in diamonds, cash, and a Picasso painting.  Although 98 percent of the plane was eventually recoverd, and over 18,000 kilos of cargo, most of the valuables for some reason were apparently never found.

A small piece of the painting was recovered, and only some of the 49 kilograms of cash.  There is a great deal of speculation as to the loss of one kilogram of diamonds carried in a special tube and 4.5 kilos of other jewelry, and most of the cash, even though a special ocean floor “vacuum” was later employed over the area after most of the other plane pieces and cargo were recovered.

At about 50 metres the area is accessible to well-trained and experienced divers although diving in the area and recovering anything is illegal. 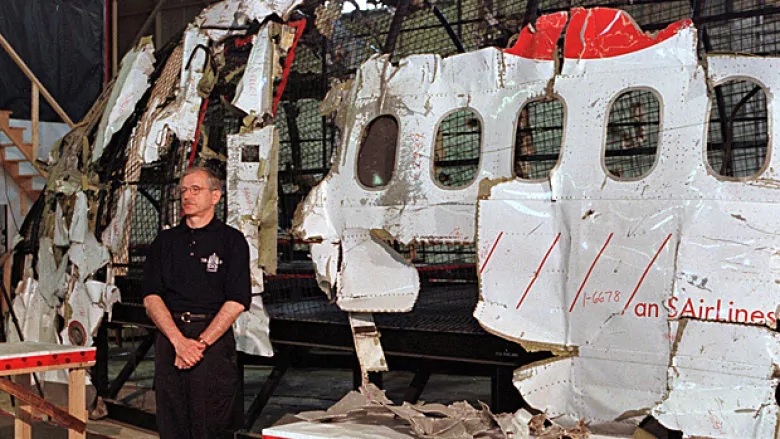 Vic Gerden, lead investigator into the crash of Swissair Flight 111 off Peggys Cove, N.S., stands in front of the plane’s cockpit at the reconstruction hangar at CFB Shearwater on May 27, 1999. (Andrew Vaughan/Canadian Press

The official version is that probably a cracked electrical wire above and just behind the cockpit was arcing and caught the metallised Mylar insulation on fire. It is believed that the wire or wires may have been related to a recently installed “in flight entertainment” system.

Some 13 wires were later determined to show evidence of electrical arcing. Although the cause was never proven with 100 per cent certainty, the Canadian investigation did reveal that the FAA approved insulation was in fact not fire resistant at all and that the end caps over the air conditioning system also concealed in the ceiling were easily melted, which could have provided oxygen to the fire spreading it rapidly.  The official final report was issued only in March, 2003.

But, there are other theories.

Although servicing crew were questioned, the former officer claims one of the employees servicing the aircraft in New York was never found. Thomas Juby claims the man provided false identification to the employer, worked one shift only, on that plane, and then disappeared.

Juby also claimed there was evidence of an incendiary device but that this was ignored. In his later book on the investigation, he alleges there was a cover-up possibly concerning terrorism. 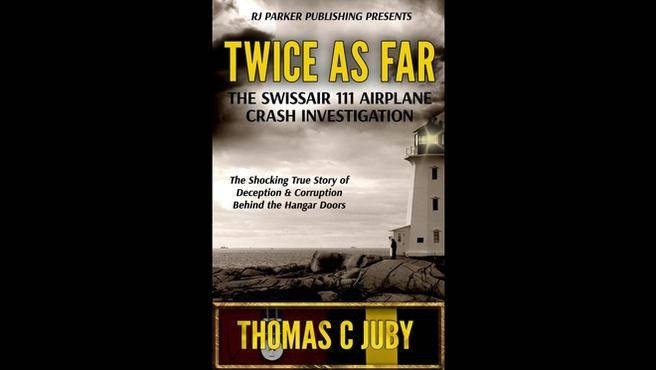 Thomas Juby, RCMP investigator claims there was a cover-up in the investigation of Swissair 111

Swissair occurred in 1998 shortly after leaving JFK airport in New York.  There was also a strange and highly unusual 13 minute loss of communication with the plane shortly before the crash, which cannot be explained.

In July 1996, a Boeing 747 (TWA flight 800), exploded in the air shortly after leaving JFK along the same regular flight path Swissaire most planes take en route to Europe.  That was attributed to a wiring short near a fuel tank, although many insist it was from a missile, possibly fired from the ground or ocean below by person’s unknown, or from a U.S Navy missile gone awry. 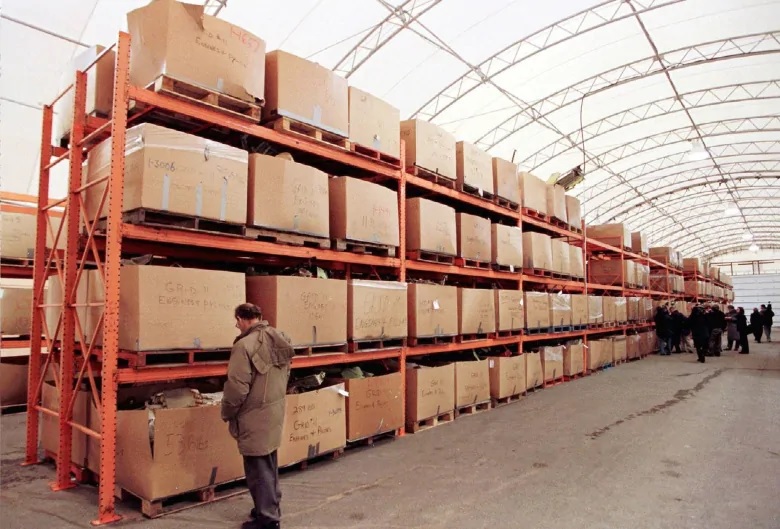 Journalists inspect boxes of the tonnes of debris from Swissair Flight 111 at CFB Shearwater in Dartmouth, N.S., in December 1998. (Andrew Vaughan/Canadian Press)

In 1999 Egypt Air Boeing 767, from Los Angeles to Cairo, made a stop at JFK, before resuming. Shortly afterward it made a steep dive into the ocean near the same area.

While an Egyptian investigation blamed a mechanical problem, the US investigation said such problems could have been overcome if they had in fact occurred and blamed the crash on  suicide, the flight recorders indicating the relief pilot saying in Arabic “ I put my trust in God” before shutting down the engines.

There are other reports of “flares” shooting up a few days before TWA 800, and missiles reported passing near other aircraft in those years.  In 1996, Pakistan Airlines 712 reported what the crew was convinced was a missile passing close. 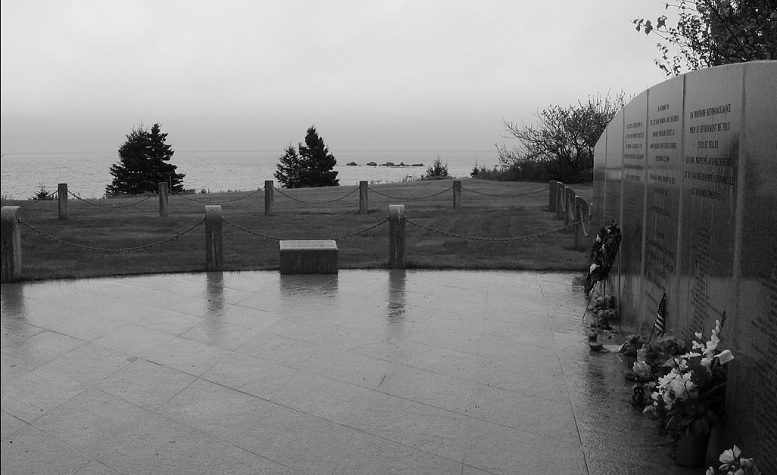 One of two memorials, this on the west side of St Margaret’s Bay at Bayswater where some unidentified remains are buried. (Outriggr-wikiCC)

Some speculate a fragment of a missile exploding near Swissair may have penetrated the plane from above possibly causing the wiring problem, although pilot transcripts report nothing unusual at that point.

There are mysteries in the years before and after the Swissair tragedy and of course still many unanswered and unresolved questions about Swissair 111 itself.

What is known is that 229 people died suddenly and tragically and hundreds more family members, relatives and friends were left to grieve and always wonder why, while thousands of local residents, recovery personnel, and investigators were also forever deeply affected by the event 20 years ago today.

In Nova Scotia, there are two memorials to the crash which occurred just outside St Margaret’s Bay, one on a small promontory near Peggy’s Cove an the east side of the bay overlooking the ocean out towards the crash site about 10 kilometres offshore, and a larger one on the west side at Bayswater where some of the unidentified remains are buried. 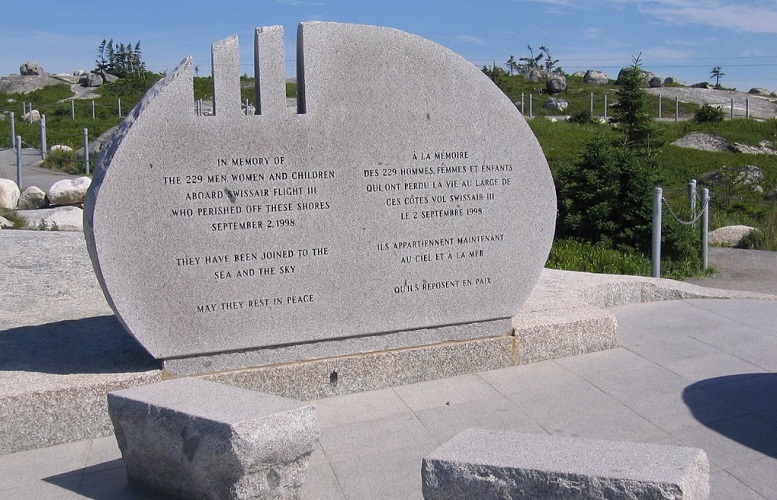 As for Swissair, the line went bankrupt two years later, in part because of the crash. 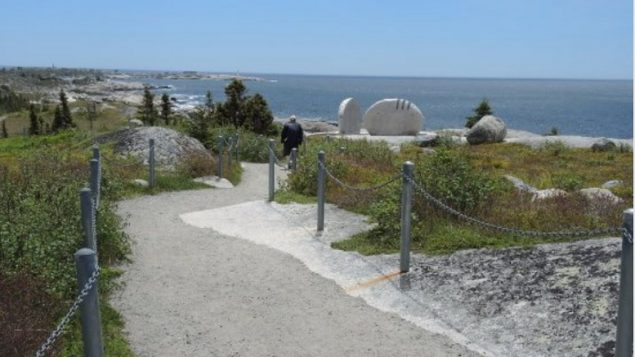