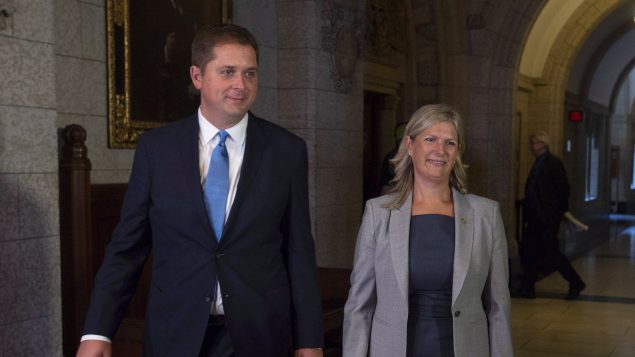 Leader of the Opposition Andrew Scheer walks with Leona Alleslev, who crossed the floor from the Liberal party to Conservative party before Question Period on Parliament Hill in Ottawa, Monday, September 17, 2018. (Adrian Wyld/THE CANADIAN PRESS)

Ontario MP Leona Alleslev delivered a painful blow to the government of Prime Minister Justin Trudeau by announcing Monday that she is crossing the floor from the governing Liberals to join the opposition Conservatives just as the House of Commons resumed sitting after summer recess.

This is the first defection the Liberals have faced since Trudeau assumed leadership of the federal Liberal Party in 2014.

Alleslev, who represents the electoral district of Aurora-Oak Ridges-Richmond Hill, previously served as a parliamentary secretary to the Liberal minister of Public Services and Procurement between November 2015 and January 2017.

Alleslev cited her concerns and mounting frustration over the government’s handling of the economy, its foreign and security policies, as well as international trade, as the reasons for crossing the floor to the opposition Conservatives.

“My attempts to raise my concerns with this government were met with silence,” Alleslev, flanked by Conservative Leader Andrew Scheer, told reporters in the foyer of the House of Commons. “It’s my duty to stand and be counted. Our country is at risk. The government must be challenged openly and publicly.”​

Scheer said he was “extremely proud” to welcome Alleslev into the Conservative fold.

“Ms. Alleslev is an extraordinary and accomplished member of this House,” Scheer said, urging other Canadians who had supported Trudeau and the Liberals but are “frustrated, even angry with ineffective leadership” to join the Tory camp.

Scheer said Alleslev, a former captain in the Royal Canadian Air Force, who held senior positions at the Department of National Defence, IBM and at aerospace manufacturer Bombardier before jumping into politics in 2014, will be appointed as shadow minister of global security.

Trudeau said he respected her choice and wished her well in her new role.