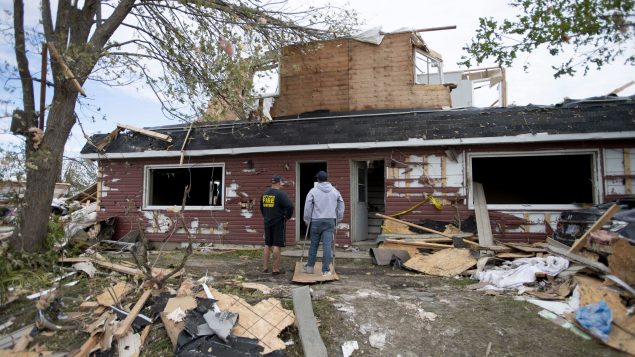 Residents Brian Lowden, left, and Alex Carlson look at the damage to their duplex caused by a tornado in Dunrobin, Ont., west of Ottawa, on Sunday, Sept. 23, 2018. The storm tore roofs off of homes, overturned cars and felled power lines in the Ottawa community of Dunrobin and in Gatineau, Que. (Justin Tang/THE CANADIAN PRESS)

Ottawa cleans up after Friday’s tornadoes

Residents of Ottawa were in full cleanup mode Monday after two devastating tornadoes touched down in the Canadian capital on Friday.

Four people remain in the care of the Ottawa Hospital Monday morning, including one in critical condition and another in serious condition, a hospital spokesperson told CBC News.

Across the Ottawa River in Gatineau, Quebec, where another tornado struck, two people were treated in hospital for fractures and 15 others came to the emergency room over the weekend to be treated for shock, according to a western Quebec health official.

Schools, community centres and municipal libraries were closed across Ottawa and many businesses urged their employees to work from home as authorities asked residents to stay off the roads and avoid the affected areas, especially Dunrobin and Arlington Woods neighbourhoods of the capital. 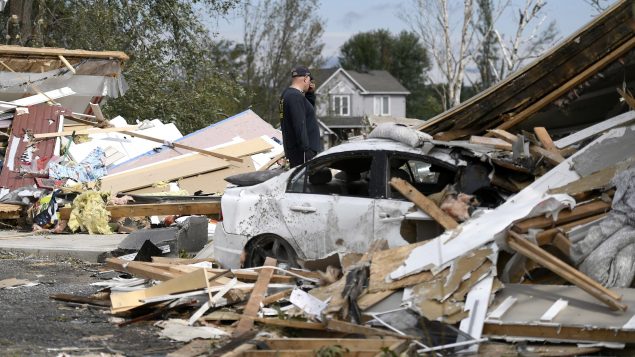 Brian Lowden stands among debris in his backyard left by a tornado, in Dunrobin, Ont., west of Ottawa, on Sunday, Sept. 23, 2018. (Justin Tang/THE CANADIAN PRESS)

Municipal authorities said Monday that their priority was to clear debris and make sure roads are safe for residents, particularly to get all traffic signals working as normal again.

More than 3,500 properties in Ottawa remained without electricity Monday morning. In Gatineau, the provincial electrical utility, Hydro-Quebec, was reporting approximately 2,600 properties without power.

Hydro Ottawa said its crews, contractors and utility partners were working around the clock to restore power. 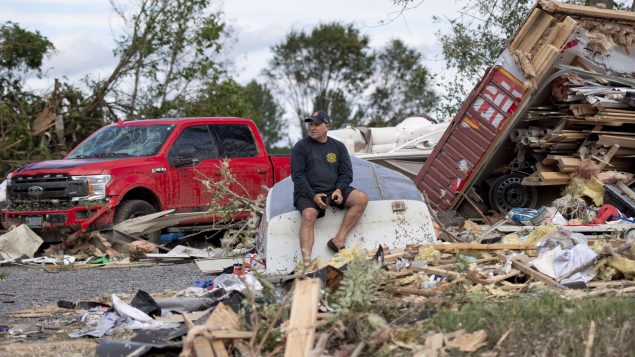 Brian Lowden sits on an overturned boat in his backyard among debris left by a tornado, in Dunrobin, Ont., west of Ottawa, on Sunday, Sept. 23, 2018. (Justin Tang/THE CANADIAN PRESS)

More than 70,000 customers lost power after a pair of tornadoes, high winds and thunderstorms that surged through the Ottawa region late Friday wreaked havoc on both the local and provincial electricity grids.

The stormed destroyed more than 50 houses in the Ottawa region. In Gatineau, about 60 buildings remained off limits Sunday night, CBC News reported. Of the 212 buildings evacuated, 153 are expected to be returned to their owners, according to the city.