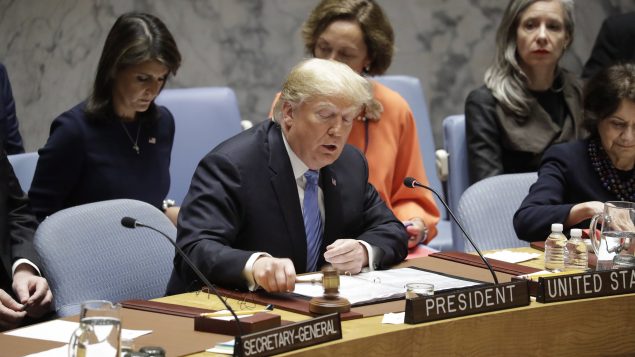 China is attempting to “meddle” in the forthcoming U.S. mid-term elections, President Donald Trump told world leaders during a meeting at the United Nations on Wednesday.

Speaking while chairing a meeting of the United Nations Security Council for the first time, Trump said China’s alleged interference was motivated by Beijing’s displeasure at his tough trade policies.

“Regrettably, we found that China has been attempting to interfere in our upcoming 2018 election,” Trump said, without offering any proof of his claim. “They don’t want me or us to win because I am the first president to ever challenge China on trade.”

The U.S. congressional mid-terms are due to be held on Nov. 6. The election will determine whether the Republican Party can keep control of the U.S. House of Representatives and the Senate. Some polls suggest that Democrats are poised to make important inroads, notably in the House.

“We did not and will not interfere in any country’s domestic affairs. We refuse to accept any unwarranted accusations against China,” China’s Foreign Affairs Minister Wang Yi told the Security Council.

The United States and China are embroiled in a trade war, sparked by Trump’s accusations that China has long sought to steal U.S. intellectual property, limit access to its own market and unfairly subsidize state-owned companies.

Trump’s comments came during a session of the Security Council that was supposed to discuss ways of preventing proliferation of weapons of mass destruction and ballistic missile technologies.

The U.S. president issued a strong warning to nuclear-aspirant Iran, which he deemed the “world’s leading sponsor of terror” fueling “conflict around the region and far beyond.”