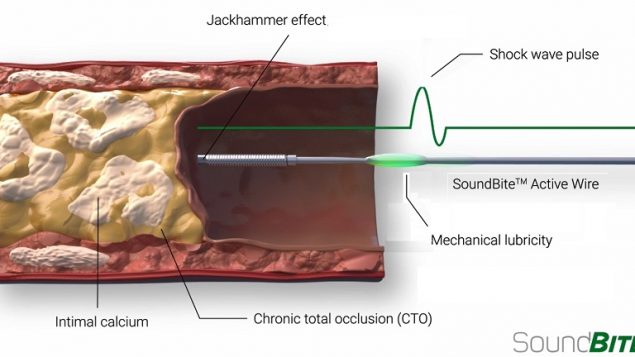 The innovative Canadian technology sends a pulse down the wire which creates an ultrasonic vibration at the tip blasting away tiny bits of the hard blockage in the artery. (SoundBite-MUHC)

A new Canadian invention has been used to clear blocked heart arteries. The new technology has been used successfully for the first time at the McGill University Health Centre (MUHC).

Dr. Stéphane Rinfret (MD, SM) performed this world first procedure. He is the chief of Interventional Cardiology at the MUHC and a physician specialized in complex angioplasties. He explains first how these blockages occur, and the new technology. 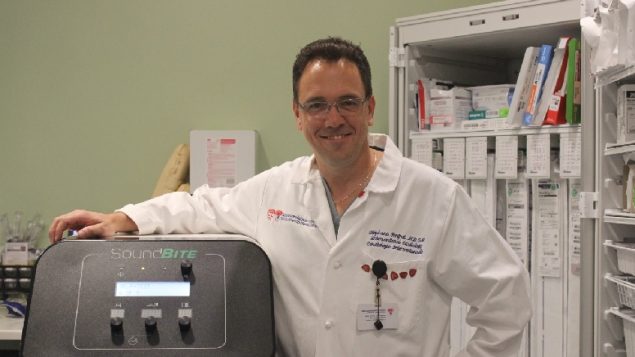 The new technology invented at the University of Sherbrooke in Quebec, uses an electric pulse sent down a thin wire made of a special alloy. When the pulse reaches the tip pressed against the obstruction it creates an ultrasonic wave, a sonic blast so-to-speak which breaks up a tiny section of the blockage into microscopic particles. As the wire is pushed forward, it continues to pulse and “jackhammer” its way through the obstruction. Used in successful trials to unblock arteries in the leg, this was the first time it was used in the more complex and delicate operation to unblock arteries in the heart. 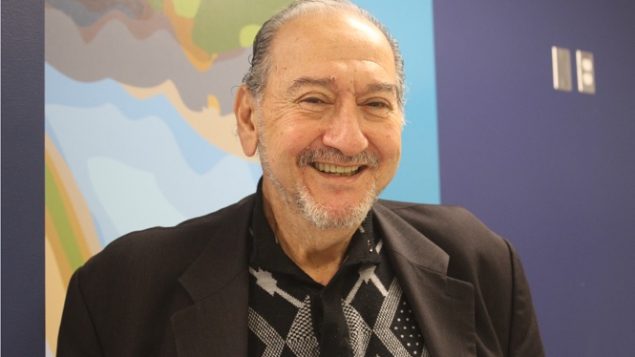 A smiling Marc Daniel R’Bibo, who was the world’s first patient to undergo the new procedure with a successful removal of a heart blockage (MUHC)

Dr Rinfret says for highly specialised surgeons like him, the standard technique works in about 90% of the cases, but for others less specialised and experienced, the standard technique success rate is much lower at about 50%.  With this new sound wave technology, it is hoped that others, although specialists but with less specific training, will be able to learn this new technology and perform these highly complex operations where they previously couldn’t, or simply wouldn’t take the chance.

Dr Rinfret who is now leading the research says the techniques to handle this new technology are still being developed as it is a powerful tool in a extremely delicate situation. He notes there may be a drawback for specialists to understand in that this “SoundBite” technology wire cannot be rotated as in the standard wire technique, but so far using the new technology in combination with known techniques, there have been successful outcomes .

Dr Rinfret says, several more procedures will take place in Canada and the US, and if successful, the innovative Canadian technology will be further expanded to eight more medical centres in Canada and the U.S. towards regulatory approval in the U.S and Canada