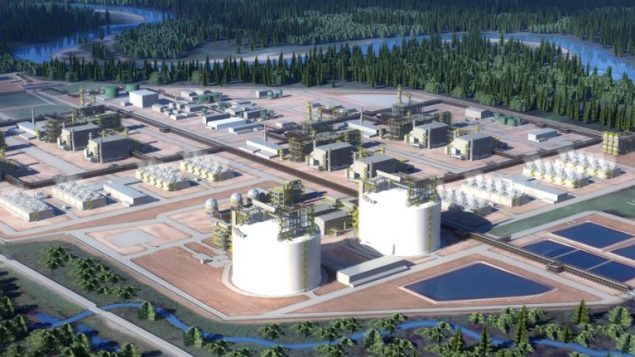 A rendering of the proposed liquefied natural gas project in northern B.C. shows the processing terminal in Kitimat. All five primary investors have signed off on the project. (LNG Canada/Flickr)

A consortium of five international investors has given its final approval for a massive liquefied national gas project in northern British Columbia that has the potential to turn Canada into an LNG export powerhouse.

The partners — Royal Dutch Shell, Mitsubishi Corp., the Malaysian-owned Petronas, PetroChina Co. and Korean Gas Corp. — have agreed to the $40-billion joint venture that includes a gas liquefaction plant in Kitimat on B.C.’s Pacific coast and a 670-kilometre pipeline delivering natural gas from Dawson Creek in the northeast corner of the province.

“We believe LNG Canada is the right project, in the right place, at the right time,” said Ben van Beurden, CEO of Royal Dutch Shell, which holds a 40-per-cent stake in the joint venture.

“Supplying natural gas over the coming decades will be critical as the world transitions to a lower carbon energy system.”

Global LNG demand is expected to double by 2035, with much of this growth coming from Asia where gas displaces coal, van Beurden said.

Canada is ideally positioned to benefit from this increased demand as the cost to deliver LNG from Canada into Asian is expected to be structurally advantaged compared to the U.S. Gulf coast, van Beurden said.

Each participating company will be responsible to provide its own natural gas supply and will individually market its share of liquefied gas.

The decision involves two processing units, with the first liquefied natural gas expected before the middle of the next decade.

“This decision showcases how industrial development can co-exist with environmental stewardship and Indigenous interests,” he said in a news release late Monday. 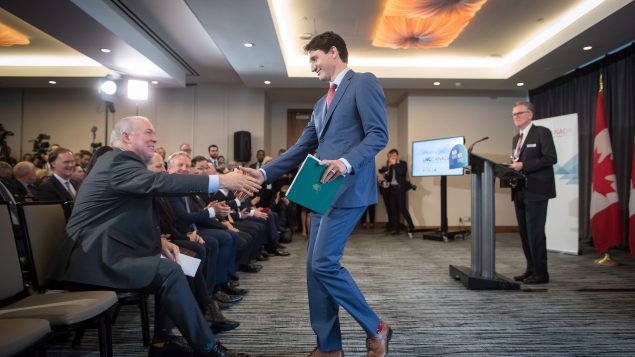 “It shows what’s possible when you collaborate and consult with Indigenous and local communities, when you coordinate all orders of government and when people insist on economic, environmental and socially responsible development of our natural resources,” Trudeau said, speaking at the announcement in Vancouver.

The project will mean 10,000 jobs at the height of construction, tens of billions of indirect government revenues and hundreds of millions of dollars in construction contracts for First Nations businesses, Trudeau said.

LNG Canada will have the lowest carbon intensity of any large scale LNG project in the world, Trudeau said.

“In the 21st century we don’t have to choose between a healthy environment and a strong economy, they must go together,” Trudeau said.

The investment is proof that Canada’s rich natural resources and its talented workforce can make it into an attractive place for investors to do business and support a clean growth economy, Trudeau said.

“Let’s be clear, Shell and its partners did not make this $40-billion investment in Canada as a last resort,” Trudeau said.

“It was a choice. It was a vote of confidence in a country that recognizes the need to develop our energy in a way that truly takes the environment into account, and that works in meaningful partnership with Indigenous communities.” 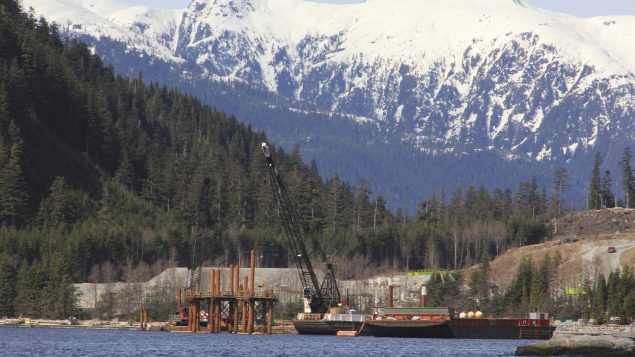 Cranes work in the water at the Kitimat LNG site near Kitimat, in northwestern British Columbia on April 13, 2014. (Julie Gordon/REUTERS)

The announcement couldn’t come at a better time for northern B.C., he said.

“For too long, whether it be the beetle kill in our forests, whether it be downturns in mineral and metal prices, we have struggled in northern B.C. to meet the challenges of growth to make sure that people can stay and live and work in their communities,” Horgan said.

“Adding such a massive new source of (greenhouse gases) means that the rest of our economy will have to make even more sacrifices to meet our climate targets. A significant portion of the LNG Canada investment will be spent on a plant manufactured overseas, with steel sourced from other countries,” he said in a statement.

“B.C. taxpayers will subsidize its power by paying rates twice as high and taking on the enormous public debt required to build Site C. There may be as little as 100 permanent jobs at LNG Canada. I believe we can create far more jobs in other industries that won’t drastically increase our emissions.”

Horgan’s minority NDP government only governs because of the support of the Green party.

Horgan defended his party’s support of LNG Canada saying in a statement that the project will be the world’s cleanest in terms of greenhouse gas emissions.

‘History is unfolding before our eyes’

“On behalf of our entire nation, we extend our gratitude to Shell, Kogas, Petronas, PetroChina and Mitsubishi for the investment being made in Haisla territory,” she said.

“History is unfolding before our eyes… The time is now, it is our time to reignite the true strength of our culture, our language and our Haisla identities.”