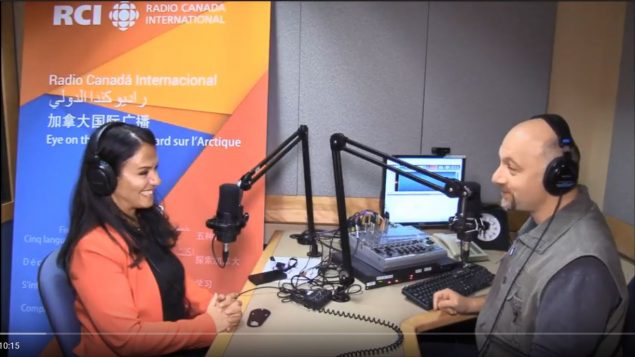 Rania Sfeir, a Canadian Citizenship Judge, talks to RCI's Levon Sevunts about her journey from a veteran broadcast journalist and an immigrant to Canada to her current position with the Citizenship Commission of the Department of Immigration, Refugees and Citizenship Canada (IRCC) (Marie-Claude Simard/RCI)

Over the last 10 years Canada has welcomed more than 1.75 million proud new Canadians.

Rania Sfeir was one of them.

She arrived in Canada with her husband and two small children from their native Lebanon in 2003 and became a Canadian citizen in 2009.

“I remember how proud I was this day,” Sfeir said in an interview with Radio Canada International, where she worked for ten years as a journalist for RCI’s Arabic language service.

“When you come here with a project, with a dream to change everything in your life and to give the best to your kids, and you arrive to the citizenship ceremony you feel like, ‘Yes! I did it!’ It’s such an achievement for me. It was such a pride that I felt. It was amazing.”

And as Canada marks Citizenship Week from Oct. 8 to 14, the veteran broadcaster says she wants Canadians to think about what makes them proud about being Canadian.

She spoke with Radio Canada International about her transition from the world of journalism to that of public service, from an immigrant to Canada to a citizenship judge.

Sfeir is one of ten citizenship judges employed by the Canadian Citizenship Commission.

In her role as a citizenship judge she has to study some of the more complicated applications for citizenship and decide whether the application can proceed or needs to be refused, Sfeir said.

The second part of her job consists of presiding over citizenship ceremonies, she said.

While most people apply for Canadian citizenship after three years of living in Canada as permanent residents, some can wait up to 12 years, Sfeir said.

“People that I meet at the ceremonies come in front of me and tell me that it’s a big-big day, because it happened after 12 years of waiting,” Sfeir said. “A lot of people cry during their ceremonies. It’s a big day!”