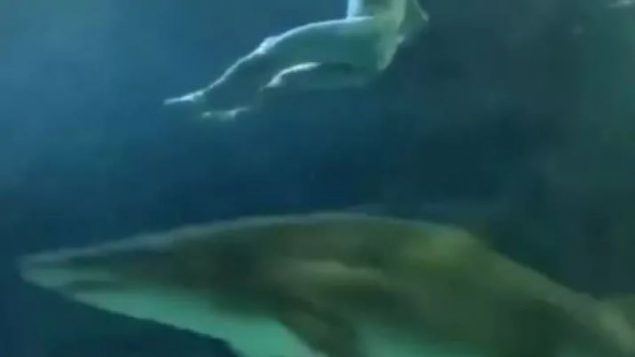 Toronto police are looking for a man who stripped naked and jumped into the shark tank at Ripley’s Aquarium of Canada. (karlzway/YouTube)

Toronto police say they are looking for a man who entered the city’s well-known Ripley’s Aquarium late Friday night, stripped naked and jumped into the shark tank.

The aquarium said in a statement that after purchasing a ticket at about 10 p.m. on Friday night, the man “immediately disrobed and proceeded to climb over the security barrier into the exhibit.”

Staff at the aquarium notified Toronto while also trying to persuade the man to come out of the shark tank.

One of the videos of the incident posted on YouTube shows the man emerge from the pool only to do a backflip.

Another video shot from one of the aquarium’s underwater tunnels, shows several sharks swimming just below the man’s feet.

The man eventually came out of the water, climbed over the barrier and went into the crowd where he was met by a woman who was holding his clothes.

He fled the scene before police arrived. However, police investigators have been provided with both surveillance video and footage taken by staff and guests, a spokesperson for the aquarium wrote in a statement.

“Ripley’s Aquarium of Canada is cooperating with authorities and is willing to press all appropriate charges once the individual has been apprehended,” the statement said.