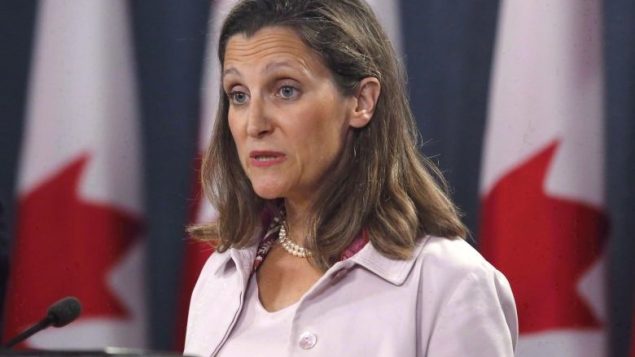 Foreign Affairs Minister Chrystia Freeland had signalled that Canada will not be backing down from its critical stance against Saudi Arabia's human rights record. (Patrick Doyle/Canadian Press)

Canada has no plans to cancel its multibillion contract to supply Saudi Arabia with advanced armoured vehicles despite ongoing concerns about the kingdom’s human rights record and a global outrage over the disappearance and possible murder of a prominent Saudi journalist, says Foreign Affairs Minister Chrystia Freeland.

Jamal Khashoggi, a Washington Post columnist and a prominent critic of the kingdom’s mercurial crown prince, walked into the Saudi consulate in Istanbul, Turkey, on Oct. 2 to get paperwork for his upcoming marriage with his Turkish fiancée never to be seen again.

Multiple reports suggest Khashoggi was tortured, killed and dismembered inside the Saudi consulate by a specially dispatched hit squad.

Speaking to reporters in Ottawa on Monday Freeland said that, while as a former journalist she is very concerned about the global climate of insecurity and threats facing reporters worldwide, the Liberal government of Prime Minister Justin Trudeau will still honour a deal to sell Light Armoured Vehicles (LAV) to Saudi Arabia signed by the previous Conservative government.

“When it comes to existing contracts, our government believes strongly that Canada’s word has to matter and it’s important for Canada’s word to last longer than one particular government,” Freeland said.

The deal to export the LAV 6.0 model produced by General Dynamics Land Systems Canada (GDLS-C) in London, Ontario, is expected to support about 3,000 well-paying jobs in Canada for the next decade, according to the Canadian Association of Defence and Security Industries (CADSI).

At the same time Canada is gravely concerned about Khashoggi’s disappearance and she has brought up the issue in a phone conversation with her Saudi counterpart Adel al-Jubeir, Freeland said.

She also discussed the case with U.S. Secretary of State Mike Pompeo as well as her British and German counterparts, she said.

“Canada and our government has a strong record of standing up for human rights around the world, very much including in Saudi Arabia, we’re going to continue to do that,” Freeland said. “It’s important to establish clear facts about what has happened and it’s important for the international community to be clear that those facts need to be established in a clear and transparent manner.”

On Sunday, Freeland joined calls by the United Kingdom, France and Germany to launch a “credible investigation” into Khashoggi’s disappearance.

In a joint statement released Sunday the U.K., French and German foreign ministers said they “share the grave concern” over Khashoggi’s disappearance.

“Canada strongly supports our allies on this important issue,” Freeland wrote on Twitter, where she retweeted the joint statement by her British, French and German counterparts.

Relations between Canada and Saudi Arabia went into a tailspin after Freeland criticized the kingdom’s human rights record and called for the release of jailed women’s rights activists in August.

Saudi Arabia took a number of drastic diplomatic and economic measures designed to punish Canada for what Riyadh said was a “blatant interference” in its internal affairs, including expelling Canada’s ambassador to the kingdom, blocking imports of Canadian grain, and ending state-backed educational and medical programs in Canada, as well as cancelling flights to and from Canada. 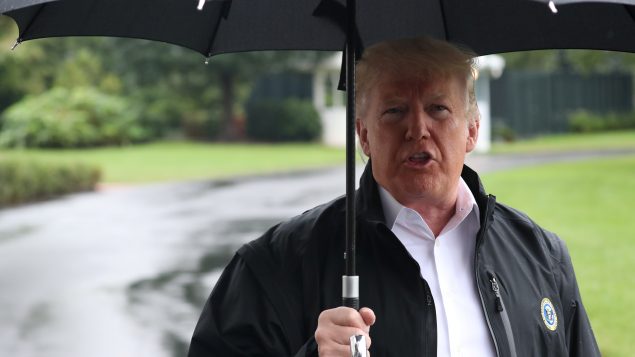 U.S. President Donald Trump talks to reporters as he departs for travel to tour hurricane damage in Florida from the White House in Washington, U.S., October 15, 2018. Trump said he had spoken with Saudi Arabia’s king about the disappearance of Saudi journalist Jamal Khashoggi. (Jonathan Ernst/REUTERS)

U.S. President Donald Trump said Monday he had spoken with Saudi Arabia’s king, who “denies any knowledge” of what happened to Khashoggi.

“He didn’t really know,” Trump said. “Maybe I don’t want to get into his mind, but it sounded to me like maybe these could have been rogue killers — I mean, who knows?”

Trump said he had dispatched Pompeo to the region.

Trump has been under pressure to take action on the suspected murder of Khashoggi, a Saudi citizen who has been living in the U.S.

Turkish officials say that they believe Saudi agents killed and dismembered Khashoggi after he entered the consulate and that Turkey has audio and video recordings of it.

The kingdom has called the allegations “baseless” but has offered no evidence the writer left the consulate.

#Statement | KSA confirms its total rejection of any threats and attempts to undermine it pic.twitter.com/VGBSmrVnIv

Saudi officials have vowed to retaliate “with greater action” against any sanctions imposed on the kingdom.

With files from The Associated Press and CBC News