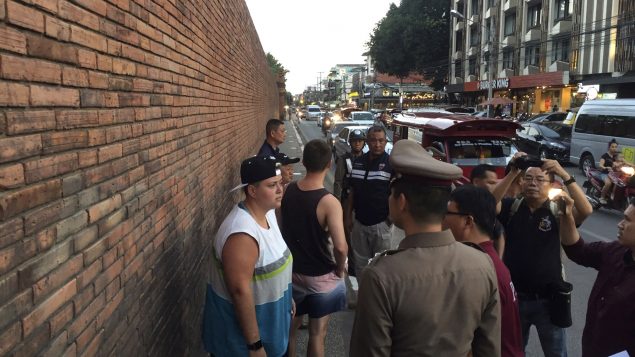 A 23-year-old Canadian woman is facing up to 10 years in prison on charges of spray-painting her initials on an ancient wall in northern Thailand, police said Friday.

Canadian Brittney Schneider and Briton Furlong Lee, also 23, were arrested on Thursday for vandalising the wall near the main entrance to the old town of Chiang Mai, said Col. Teerasak Sriprasert, chief of local police.

The pair spray-painted “Scouser Lee B,” Teerasak said. “Scouser” is a British slang word for a Liverpool native.

Schneider and Lee were caught when they returned to the site to correct the spelling, he added.

Teerasak said that the pair are in custody and have been charged with vandalizing registered ancient artifacts, which carries a penalty of up to 10 years in prison and a fine of one million baht ($40,180 Cdn). The 13th century Tha Pae Gate is part of an ancient wall that forms a square around Chiang Mai’s inner city.

“Both of them confessed to the crime. They said they were just drunk,” Teerasak told reporters.

Teerasak said that Lee, who is from Liverpool, admitted that he wrote “Scouser Lee” on the wall while Schneider told police that she wrote the letter “B” underneath it.

Global Affairs Canada spokesperson Philip Hannan said consular services are being provided to a Canadian citizen who has been arrested in Thailand.

“Canadian consular officials are in contact with local authorities to gather additional information,” Hannan said in an emailed statement to Radio Canada International. “Due to the provisions of the Privacy Act, no further information can be disclosed.”

There have been several cases of international tourists who have run afoul of Thai laws for disrespecting sacred historical sites before, including the case against a U.S. gay couple who were arrested after they posted pictures of themselves with bare bottoms at a Bangkok temple last November. However, it is believed to be the first time an arrest has been made over graffiti.