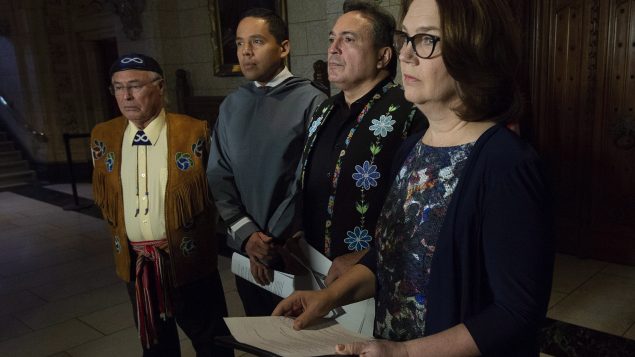 In an effort to reduce the alarming number of Indigenous children in foster care, the federal government is ready to empower Canada’s Indigenous governments to take control of child welfare services in their communities, Indigenous Services Minister Jane Philpott announced Friday.

Standing alongside national Indigenous leaders in Ottawa, Philpott said the federal government in conjunction with Indigenous leaders is co-developing legislation, which if adopted by parliament, will devolve authority to First Nations, Inuit and Métis peoples to care for their own children in need of care.

The current system of child welfare in Canada is run by the provincial and territorial governments and often results in Indigenous children being removed from their communities and torn from their families.

“Every day in this country, on our watch, someone walks into a home, or, perhaps, a hospital room, where a First Nations, or Inuit of a Métis mother has given birth and that baby, toddler and child is taken away from their family,” Philpott said.

“They are taken away on the most part on the basis of something that is euphemistically called ‘neglect’ but in truth they’re often taken for reasons of economic poverty, inadequate housing, unresolved health issues.”

The policy is the modern day variation of the legacy of Canada’s infamous Indian residential schools, Philpott said.

“As a result of these practices that take place every day in this country there are now tens of thousands of Indigenous children in the foster care system across the country,” Philpott said.

“These are the most vulnerable children in our country and we need to listen to them,” she said. “But above the noisy din of our day-to-day lives the cries of these children are barely audible.”

Children in foster care are at high risk of homelessness, becoming missing persons, becoming incarcerated or developing problematic substance use and are more likely to become victims of human trafficking, homicide and suicide, Philpott said.

“First Nations are ready to reform child and family services in ways that respect our rights, cultures and family structures. First Nations have been held back for years by outdated laws, and we continue to experience the trauma and loss when children and families are broken apart,” Bellegarde said.

Philpott said Ottawa is already working to reduce the financial incentives for agencies to apprehend children, moving away from a funding model that was tied to the number of kids in care.