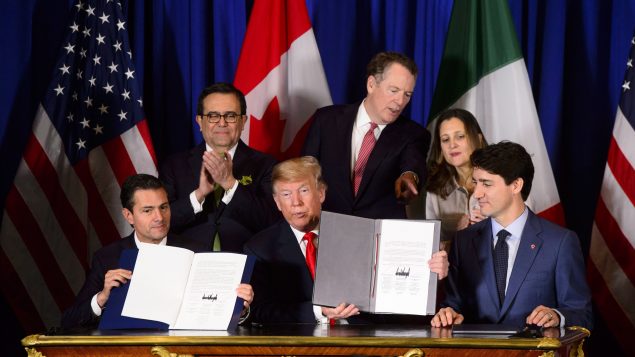 Canada, the United States and Mexico signed a renewed North American free trade pact on the sidelines of the G20 Summit in Buenos Aires Friday that once ratified by the legislatures in all three countries will replace the 24-year-old North American Free Trade Agreement.

President Donald Trump attempted to repair strained relations with Canadian Prime Minister Justin Trudeau and brushed aside difficulties he may have in getting the deal through U.S. Congress, where opposition Democrats will control one of its two chambers.

The leaders of the three countries had agreed on a deal in principle to replace NAFTA after 14 months of sometimes acrimonious negotiations and arm-twisting on Sept. 30.

Trump had vowed to revamp NAFTA during his 2016 presidential election campaign. He threatened to tear it up and withdraw the U.S. completely at times during the negotiation, which would have left trade between the three neighbours in disarray. 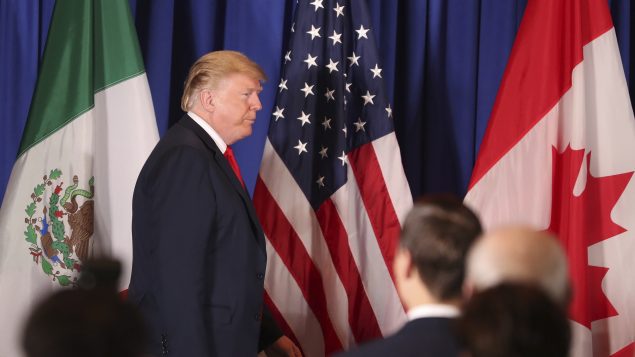 President Donald Trump arrives for a signing ceremony of a new trade agreement between the U.S., Mexico and Canada, on the sidelines of the Group of 20 summit, in Buenos Aires, Argentina, Friday, Nov. 30, 2018. The USMCA, as Trump refers to it, must still be approved by lawmakers in all three countries. (Martin Mejia/AP Photo)

In a tweet after the signing, Trump said: “The terrible NAFTA will soon be gone. The USMCA will be fantastic for all!”

In his speech during the signing ceremony Trudeau called it the “new NAFTA.”

As is the custom, Canada will change the order of the countries in its legal version of the name, putting Canada first (CUSMA).

“The new North American Free Trade Agreement maintains stability for Canada’s entire economy, stability that’s essential for the millions of jobs in middle class families across the country that rely on strong, reliable trading relationships with our closest neighbours,” Trudeau said in a short speech during the brief and low-key signing ceremony.

The new agreement lifts the risk of serious economic uncertainty that lingers throughout a trade renegotiation process, Trudeau added.

“There is much more work to do in lowering trade barriers and in fostering growth that benefits everyone,” Trudeau said. “But reaching a new free trade agreement with the United States and Mexico is a major for our economy.”

Trudeau also used the signing to remind Trump that Canada has no plans to abandon its fight to get the U.S. administration to drop its tariffs on Canadian steel and aluminum.

Conservative Leader Andrew Scheer, slammed Trudeau’s decision to participate in the signing ceremony while tariffs are still in place, saying it was “one more final humiliation.”