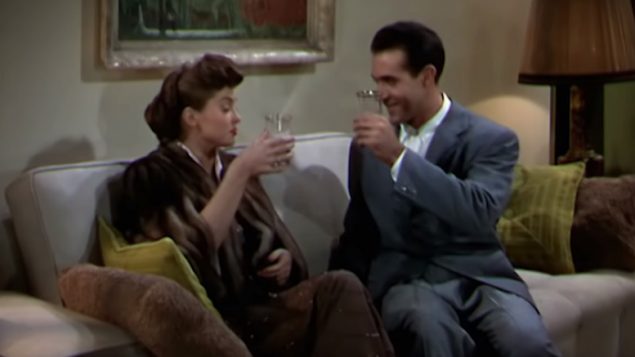 Scene from the MGM film Neptune's Daughter with Esther Williams and Ricardo Montelban singing Baby It's Cold Outside, (MGM-YouTube)

(public commenting open- comments will be posted after moderating)

The song was written decades ago in 1944 and has been very popular ever since, especially around Christmas.

Now, viewed through today’s eyes, some people have taken offence spurred on by the “me too” movement and concerns over sexual consent and coercion. Several radio operations, including Canada’s public broadcaster, CBC, have removed it from their playlist agreeing with other broadcasters that the lyrics are now inappropriate.

The movement to pull the song started with a radio station in the U.S, and has spread to many other stations, and now into Canada where major media outlets, Rogers, Bell, and CBC have joined in removing it from playlists.

Quoted by the Canadian Press, CBC  public affairs head Chuck Thompson said of the decision, “Song lyrics are always open to interpretation, and we fully acknowledge there are two camps regarding this issue”,

Celebrated composer and lyricist Frank Loesser originally wrote it for himself and his wife to perform at a party.

Loesser’s wife apparently later wrote “”We become instant parlor-room stars. We got invited to all the best parties for years on the basis of ‘Baby.’ It was our ticket to caviar and truffles. Parties were built around our being the closing act”.   This was because it was written and used as song to indicate to party guests that it was time to leave

Loesser then sold the song to MGM who used it in the comedy film “Neptune’s Daughter, It won an Academy Award in 1949 for best original song.

It has since been performed and recorded by many top actors and singers over the decades. From Dean Martin to Dolly Parton including a new video version by Canadian Michael Bublé and Idina Menzel.

Reacting to the controversy, Leosser’s son has said his father would be mortified to think people now interpret the song as sexual harassment.