The federal government and the Inuit have reached another milestone in creating Canada’s largest marine conservation area in the northeastern part of the fabled Northwest Passage, officials announced Tuesday.

The Qikiqtani Inuit Association (QIA), which represents approximately 14,000 Inuit in the Qikiqtani (Baffin) Region of Nunavut, and the federal government announced that they have reached an agreement in principle, outlining key elements of the future Inuit Impact and Benefit Agreement for Tallurutiup Imanga National Marine Conservation Area.

“It’s a very historic moment to come to an agreement in principle for Tallurutiup Imanga,” Akeeagok said. “It’s a body of water that plays such a critical role for Inuit.”

“It’s one that puts the people of the region first,” Debicki said. “That’s really a recognition that people in the best position to manage this wonderful ecosystem are the people who have been managing it for centuries.” 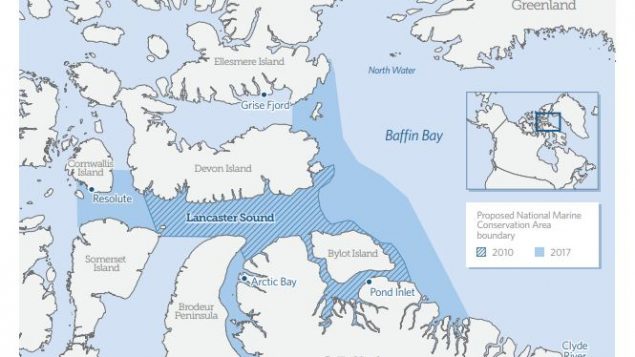 Once the Inuit Impact and Benefit Agreement is finalized and an Interim Management Plan is completed, Tallurutiup Imanga National Marine Conservation Area will be the largest protected area in Canada at approximately 109,000 square kilometres. (The Pew Charitable Trust)

Tallurutiup Imanga (Lancaster Sound) National Marine Conservation Area, which covers an area of about 109,000 square kilometres, has had a huge significance for the Inuit who have relied on its natural bounty to survive and thrive, Akeeagok said.

“The Inuit right from the beginning had initiated that they want to play a central role through managing such an important body of water,” Akeeagok said.

Infrastructure development in the Inuit communities was another major goal, he said.

All five communities adjacent to Tallurutiup Imanga are coastal communities that rely very heavily on the sea for their food and transport, Akeeagok said.

“And there is absolutely no marine infrastructure at the moment.”

The Inuit of the region also want to build a food processing plant in the area, Akeeagok said.

“That would really, truly enable the communities to become more self-sufficient with the resources around them,” he said. “I think we are all aware of the food insecurity faced by the Inuit and that’s an essential piece that we continue to truly try and create opportunities for sharing of food.”

“In this particular case we’re very fortunate to have started a pilot program up in Arctic Bay, Nunavut, which has employed five Inuit who are the eyes and ears of patrolling, of providing research, providing traditional science,” Akeeagok said. “We’re hoping to replicate that through the other four communities.”

In addition, Ottawa and the Inuit have agreed to explore the possibility of creating marine conservation areas north of Grise Fiord in the High Arctic Basin in an area known to the Inuit as Tuvaijuittuq (which means “the ice never melts” in Inuktitut), said Akeeagok.

The Inuit have been pushing the federal government for over five decades to protect Tallurutiup Imanga, he said.

In August 2017, the federal government, the QIA, and the government of Nunavut, announced the final boundaries for Tallurutiup Imanga National Marine Conservation Area at a ceremony in Pond Inlet, Akeeagok said.

Ottawa and QIA are hoping to complete the negotiations by April 2019, Akeeagok said.