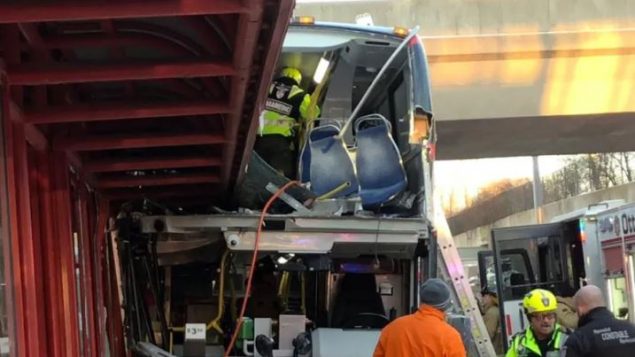 Three people were killed and 23 others injured after an Ottawa city bus slammed into a bus shelter in the city’s western Westboro neighbourhood late Friday.

The collision of the OC Transpo double-decker bus happened on the westbound Transitway just before 4 p.m. local time (21:00 GMT).

Ottawa police said in a tweet that the crash was “serious.”

“Our hearts and condolences go out to all those injured, those family members who have lost loved ones,” Ottawa Mayor Jim Watson told reporters.

“Our thoughts are also with the others on that bus, at that station — those directly involved and those who witnessed the collision.”

Prime Minister Justin Trudeau, who was in Saskatchewan, tweeted his “deepest condolences to the families of victims.”

I want to send my deepest condolences to the families of victims and everyone affected by today’s tragic bus crash in Ottawa. Thank you to the first responders who rushed to help – we’re monitoring the situation closely.

Ottawa Police Chief Charles Bordeleau told reporters that the most serious injuries occurred on the top right side of the bus.

Police are trying to determine what caused the collision, including whether icy roads and the bitter cold may have been factors, Bordeleau said.

Police responding to a serious bus collision at 3:50pm at the Westboro Station, several persons injured.

No further details available at this time. #otttraffic

@CBCOttawa here is a video of the bus crash scene at the Westboro station pic.twitter.com/lCvqvgIWmE