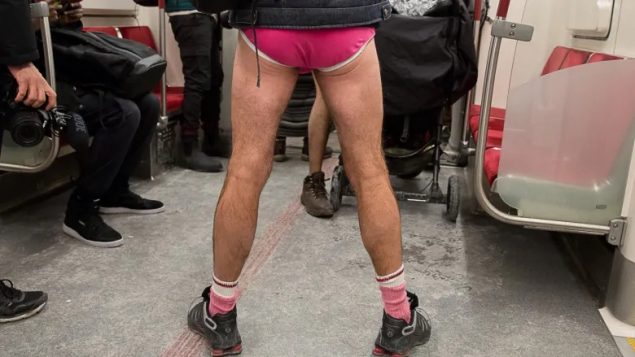 No Pants Subway Ride Day - an event started in New York in 2002, has now spread to many countries around the world. Shown is a Montreal participant in last year's event in Toronto. (David Donnelly-CBC)

Not to be confused with “no pants day” which occurs in May, the No Pants Subway day is in January.

This coming Sunday, people who join in will remove their pants and ride the subway (Metro- Tube- U-bahn) without pants or dresses, and sometimes sporting funny underwear.

The idea started as a sort of joke by a New York comedic performance group “Improv Everywhere”. The first event was held in 2002 with a total of seven people on the New York subway.  Before YouTube and social media, it was slow to catch on, but now people join in for a bit of fun in cities all across North America, Britain and elsewhere all around the world.. 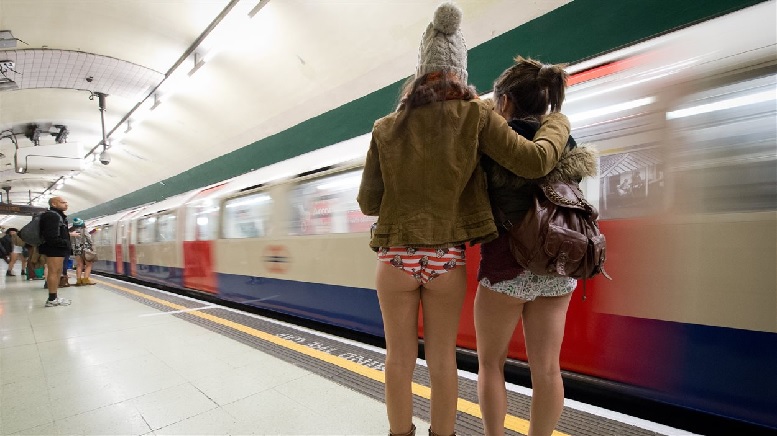 It could be quite chilly for participants in the Canadian cities of Montreal and Toronto which have subways as the temperature will be in around -14 C in Montreal, and -6 in Toronto, although certainly warmer in the subways, it will still be cool as the systems have no heating or air conditioning,.  In Vancouver their rail transit system is outside and above ground called “Skytrain”, and although the wagons have heat and AC,  participants might get a chilly draught when the doors open as it is expected to be only  8 degrees C on Sunday.

Calgary, where people have joined in for the past 11 years, has the C-train light rapid transit (LRT) system and although also heated and cooled it too runs outside so waiting on a platform at a cool 10 C can also be an chilly experience.